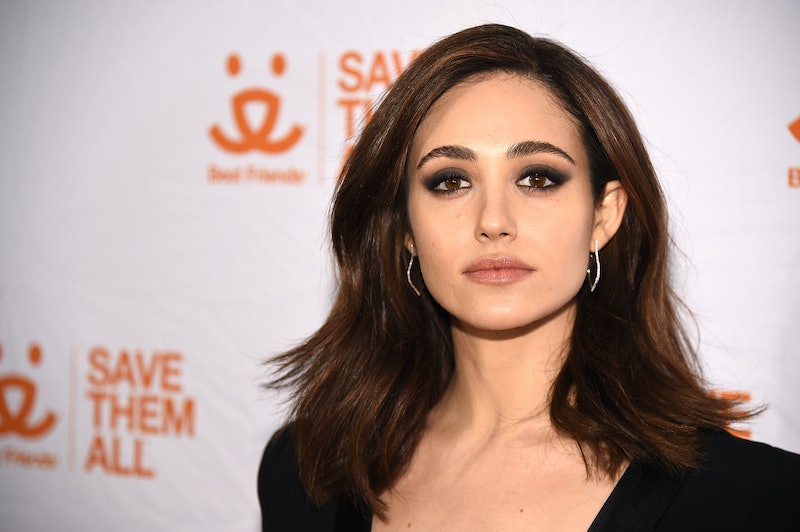 Emmy Rossum may have left the hit Showtime series Shameless after its ninth season, but she has absolutely no regrets from the show, including her decision to participate in nude scenes. In fact, she'll even go as far as to stop haters from using her role on the show against her. Emmy Rossum shut down a Trump troll trying to shame her for nudity, and true to her character, she was absolutely shameless.

On Wednesday, Oct. 7, during the Vice Presidential debate, Rossum wrote on Twitter that she "can't wait" to get her "I'm Speaking" t-shirt, referencing Democratic VP candidate Kamala Harris' iconic declaration to Mike Pence, the acting VP and her opponent, when he repeatedly tried to interrupt her. However, one Trump fan tried to use the actor's joke to shame her for her career choices, responding, "Yeah your shirts that say I GET PAID TO GET NAKED ON TV are sold out."

Of course, she wasn't going to stand for that. In response, Rossum thoroughly shut down the attempt at sex-shaming. "I get paid to tell stories and life sometimes involves this awesome thing called sex," she wrote back. "Maybe you’ve just never had any so you don’t know." Fiona Gallagher would approve.

Hours later, Rossum followed up with another tweet explaining that Trump supporters often resort to sex-shaming her and saying things like “Shut up and go back to being naked" when she expresses any political opinion that goes against Trump. "When I say something Trump supporters hate, they love to come at me for my body," she wrote. "They seem to think I should be ashamed of my female naked body. I don’t feel shame. I love my body. That must be intimidating for them. I’m not sorry."

In a 2014 interview, Rossum told E! News that getting naked in character was very easy "because it's just playing pretend" and "you don't feel like yourself." However, the actor also admitted in a separate interview with The Huffington Post that her character's nudity caused some difficulty in her dating life, as some guys have a certain expectation of her based on what they see onscreen. “It’s definitely weird on first dates when guys have already seen your boobs,” she conceded.

More like this
This 'One Tree Hill' Wardrobe Error Is Going Viral On TikTok
By Brad Witter
Pamela Anderson's Sons Brandon & Dylan Have Their Own Hollywood Careers
By Arya Roshanian
Ashton Kutcher Wants Danny Masterson “To Be Found Innocent” In Rape Retrial
By Jake Viswanath
Linda Ronstadt’s “Long Long Time” Plays A Pivotal Role In The Last Of Us
By Brad Witter
Get Even More From Bustle — Sign Up For The Newsletter
From hair trends to relationship advice, our daily newsletter has everything you need to sound like a person who’s on TikTok, even if you aren’t.