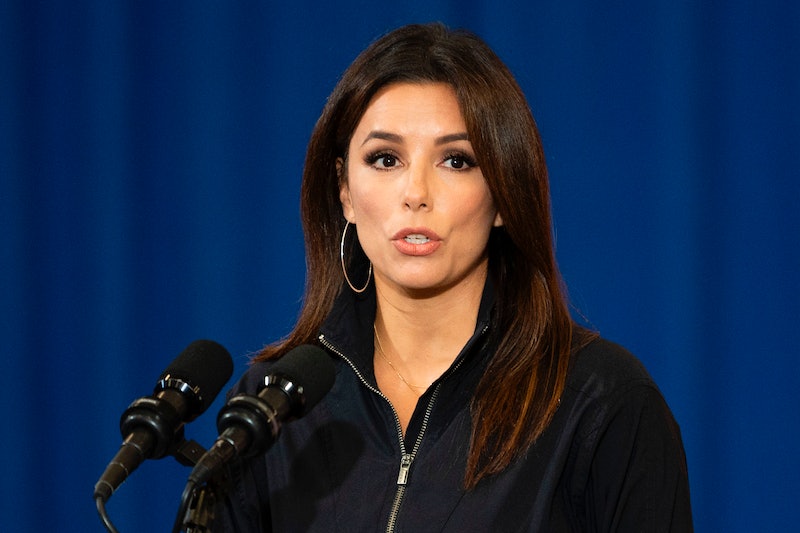 After facing accusations of downplaying the impact of Black women on the 2020 election, Eva Longoria has issued an apology. It all started with a Nov. 8 appearance on MSNBC, where the actor spoke about the influence of Latina women on electing Joe Biden as the next president. "Of course, you saw in Georgia what Black women have done but Latina women were the real heroines here, beating men in turnout in every state and voting for Biden-Harris at an average rate of 3:1," she said.

Longoria's remarks earned her backlash from viewers who felt that she had undermined the significant role Black women played in the election; 91% of Black women voted for President-elect Joe Biden and Vice President-elect Kamala Harris, according to NBC News exit polls. Longoria was also accused of perpetuating anti-Blackness and ignoring the importance of votes from Afro-Latinas.

Later on, the Desperate Housewives star penned an apology letter for her comment, explaining that her intention was to convey that Latina women "turned out in greater numbers" than Latino men. "I'm so sorry and sad to hear that my comments on MSNBC could be perceived as taking credit from Black women," she wrote. "My wording was not clear and I deeply regret that."

The activist went on to acknowledge how pervasive anti-Blackness is in the U.S., something that she never wanted to contribute to. "Let me be very clear: Black women have long been the backbone of the Democratic Party, something we have seen played out in this election as well as previous ones," she said. The actor wrapped up her message with a promise to always stand in solidarity with Black women. "Latinas (many who identify as Afro-Latina), indigenous women, AAPI women and other women of color are standing with them so we can grow our collective voice and power," she added. "Together, we are unstoppable! Nothing but love and support for Black women everywhere! You deserve a standing ovation!!!!"

While Twitter users had mixed reactions to Longoria's apology, one of the star's famous friends came to her defense online. Kerry Washington, who has worked closely with Longoria on several Democratic fundraisers and events, responded with a message of support. "I know Eva like a sister," she wrote on Twitter when sharing her apology. "We have been in many trenches together. She is a fighter for all women. Read below. This is what she meant. This is how she truly feels."

More like this
Beyoncé Has Officially Won The Most Grammys Ever & Twitter Is Losing It
By Jake Viswanath
The Beyhive Is Mad At Harry Styles After Beyoncé’s Album Of The Year Snub
By Jake Viswanath
Here’s How You Can Watch The Grammys 2023 In The UK
By Emma Madden and Catharina Cheung
Jameela Jamil Defends Sam Smith After Trolls Body-Shamed Them
By Jake Viswanath
Get Even More From Bustle — Sign Up For The Newsletter
From hair trends to relationship advice, our daily newsletter has everything you need to sound like a person who’s on TikTok, even if you aren’t.