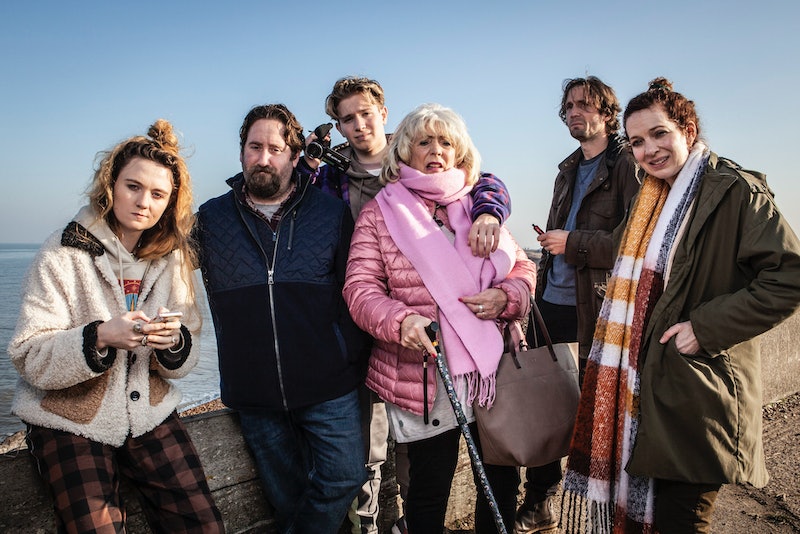 At a time when even going on a staycation is off the cards for many, the BBC sure know how to lift everyone's spirits. Starring Gavin & Stacey's Alison Steadman and I.T. Crowd's Katherine Parkinson, Pandemonium is probably one of the most relatable offerings this festive season has to offer — whether you had to cancel the holiday of a lifetime or are just yearning to spend quality time with your fam outside the house. So here's everything you need to know about Pandemonium, because you and the Jessop family have a lot in common.

What Is Pandemonium About?

Written by Tom Basden, who also stars in the series, Pandemonium follows the Jessop family as they deal with the cancellation of "the holiday of a lifetime" to California due to the pandemic. Instead of wallowing in what could have been, they decided to have their summer holiday after all in the middle of October in Margate. Hilarity ensues, of course. And it's all filmed from the perspective of the youngest Jessop family member, Sam. Captured through his video camera and others he's set up . Sam captures exactly how the Jessop's interact with each other.

Is Pandemonium Based On A True Story?

While Basden was initially inspired to write the series due to his love of the National Lampoon Vacation films and the "warmth and chaos" they had, he also fondly remembers family holidays to Cornwall which his grandad would film. "His videos were very funny by accident, because he'd capture things that were embarrassing or ridiculous despite setting out to make the family look happy and harmonious," the series writer told the BBC.

"I also liked the idea of a family talking to the camera and being aware that they were being filmed as it puts them under even more pressure to project positivity while everything is going wrong around them."

Who Stars In Pandemonium?

When Will Pandemonium Air?

Pandemonium airs on BBC One at 9:45 p.m. on Dec. 30. It's only one half-hour episode though sadly. But, if you end up missing it or want to rewatch it for the bants, you can watch it on iPlayer immediately after its finished on the telly.