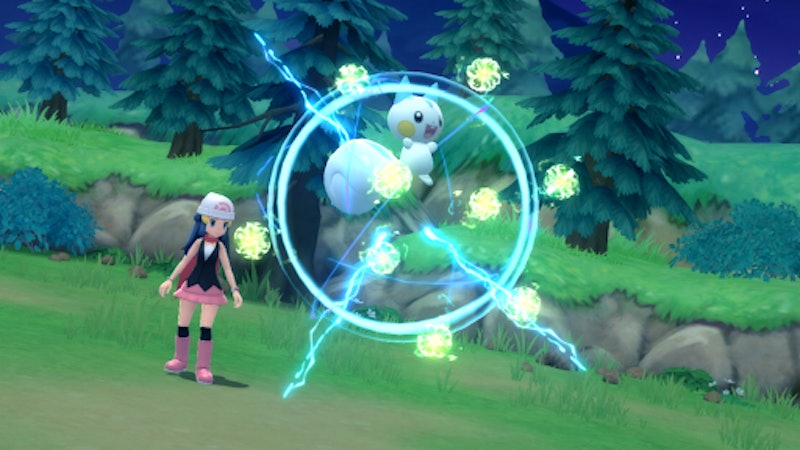 This year marks the 25th anniversary of the Pokémon franchise, and boy do they know how to celebrate. Along with a few other titles, products, and nostalgic throwbacks, the Pokémon Company revealed the long-awaited remakes of the 2007 games Diamond and Pearl. Now retitled Brilliant Diamond and Shining Pearl, the games will include mechanics players are familiar with, alongside new features not implemented in the original titles.

On Aug. 18, 2021, a new trailer for the remakes debuted during a Pokémon Presents event, revealing even more information as well as an actual release date.So here’s everything you need to know about the Pokémon Diamond and Pearl remakes, and what to expect from the games.

How Are Pokémon Diamond & Pearl Being Remade?

Brilliant Diamond and Shining Pearl have been “faithfully reproduced” according to Game Freak, and will maintain “the sense of scale in the originals’ towns and routes [that] have been carefully preserved.”

In this sense, the games will be marginally different from the remakes of Ruby and Sapphire, as well as the recent Let’s Go games. It seems that Brilliant Diamond and Shining Pearl have been designed more in the vein of Fire Red and Leaf Green, as well as HeartGold and Soul Silver.

Brilliant Diamond and Shining Pearl are also the first games to not be produced by Game Freak. Instead, Game Freak will be focusing on Pokémon Legends: Arceus while the studio behind Pokémon Home, ICLA Inc., is making the remakes per Polygon. However, Junichi Masuda, the director of the original Diamond and Pearl games, is working on the remakes.

While Brilliant Diamond and Shining Pearl remain faithful to the originals, the latest trailer revealed a variety of familiar mechanics that will be implemented in the remakes. These include Pokémon following you as you explore, customisation via the Style Shop, the ability to decorate your Poké balls (which in turn change their animation), and an online space called the Union Room where you can battle and trade Pokémon.

Prominent features from the original titles will also be included, such as Super Contests and the Underground (now called the Grand Underground). The latter comes with a twist, as the player can now explore Pokémon Hideaways that resemble mystery dungeons where you can find Pokémon that you otherwise might not discover above ground. The types of Pokémon you find are influenced by statues you can collect from exploring the Grand Underground.

There’s also the possibility that gameplay from other titles could still return before the game’s release. Mechanics like Mega Evolution and Z-Moves from newer games have been re-introduced in remakes for Ruby and Sapphire as well as Let’s Go Pikachu and Eevee.

It seems that gameplay from Pokémon Platinum could be included too, which was an extension for the original Diamond and Pearl games. Twitter user @voltimer_ pointed out that an NPC (non-playable character) only featured in Platinum was spotted in the trailer, as well as the Pokémon Porygon Z. YouTuber Austin John Plays also noted that Houndoom can be caught in these titles, which was only ever available through Platinum.

Where Can You Buy The Games?

If you buy the game before Feb. 21, 2022, you can obtain the mythical Pokémon Manaphy via the Mystery Gift function in Brilliant Diamond and Shining Pearl. Previously this Pokémon was only available through the DS game Pokémon Ranger and My Pokémon Ranch on the Nintendo Wii.