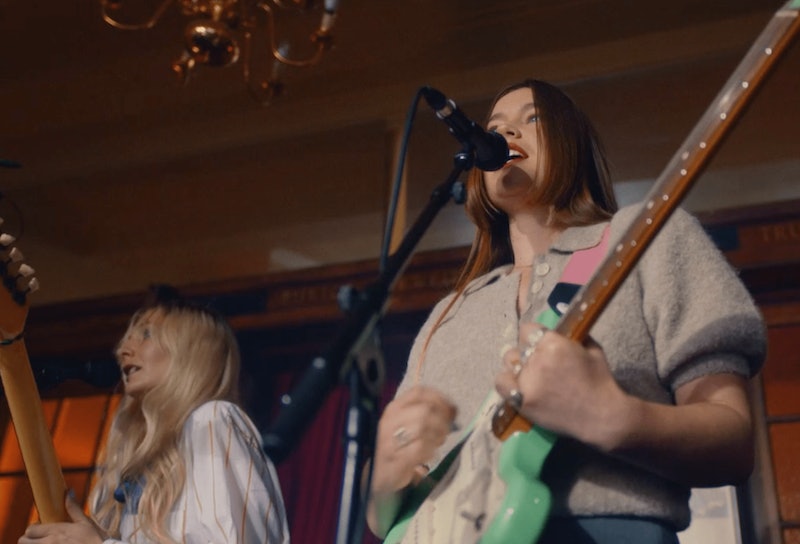 With only two songs released, alt indie duo Wet Leg have already amassed nearly six million streams on Spotify. Those who have been lucky enough to see the rising stars live will have been treated to a few more tracks, like ‘I Don’t Want To Go Out’ and ‘Supermarket’, but as the Guardian notes, every date on their 2022 UK tour is already sold out.

According to NME, a debut album is on the way. But before that arrives here’s everything you need to know about Wet Leg and their rise to success.

Who Are Wet Leg & Where Are They From?

Wet Leg consists of Rhian Teasdale and Hester Chambers, who first met while studying at the Isle of Wight College. Both natives to the island off the coast of Hampshire, Teasdale and Chambers formed Wet Leg in a drunken haze on top of a ferris wheel after Idles performed at the End of the Road festival in 2019.

Before that, Teasdale was trying to forge a solo career but couldn’t handle it. “I didn’t want to do it anymore,” Teasdale told BBC Radio 1 Newsbeat. “But I still had some shows books so I asked Hester if she’d come on stage to complete the run of shows.”

So on that fateful ferris wheel adventure, the duo decided to form their own band. “We agreed on the premise of our band there and then: as long as you’re having fun, then everything will be alright,” Teasdale recalled in an interview with NME. “And we’ve told ourselves that we’ll stick to that, always.”

How Did Wet Leg Find Success?

Inspired by their shared love of The Ronettes, Jane Birkin, Ty Segall, and Björk, Teasdale turned her attention from the piano to guitar, and the two started writing songs. After forming a band with Josh, Henry, and Ellis – who are also Isle of Wight natives – the band signed with Domino, a well-established record label who just so happen manage the Arctic Monkeys, Alison Mosshart, and Franz Ferdinand.

Soon after getting signed, Wet Leg eventually released their debut single, ’Chaise Longue’ in June 2021, followed by ‘Wet Dream’ in September. Wet Leg quickly started to gain traction on Spotify and YouTube after the single dropped, which was thanks in part to a Mean Girls reference in ‘Chaise Longue’ and the unique lobster outfit stylings in the music video for ‘Wet Dream’.

“The reaction to those two songs has been so good and the opportunities we’re receiving are unbelievable,” Teasdale told Newsbeat, with those opportunities including playing at Latitude and the Isle of Wight Festival last summer.

“I know that people are putting a lot of faith in us.” Most recently, Wet Leg performed on Later… With Jools Holland and have been named by Amazon Music as one of their Artists to Watch 2022, as well as VEVO DSCVR.

When Is Wet Leg’s Debut Album Out?

The duo hasn’t officially announced their debut record as of yet, but they have plenty of songs to put on one. Teasdale revealed to Newsbeat that the duo have a secret folder with about “30 tracks” on that only her housemates have the link to.

“They’re like embarrassing mums. Every time friends come over they say ‘Do you want to hear some unreleased Wet Leg?’ and I have to leave the room,” the musician explained. “If you want to hear the exclusive then get a dinner invite from my housemates.”

More like this
Here’s How You Can Watch The Grammys 2023 In The UK
By Emma Madden and Catharina Cheung
All The Ways You Can Watch The Super Bowl In The UK
By Asyia Iftikhar and Darshita Goyal
Mimi Webb’s IRL Situationship Inspired “Red Flags”
By Catharina Cheung
This Girls Aloud x Sugababes Collab Still Hits All The Right Notes
By Sophie McEvoy
Get The Very Best Of Bustle/UK
Sign up for Bustle UK's twice-weekly newsletter, featuring the latest must-watch TV, moving personal stories, and expert advice on the hottest viral buys.