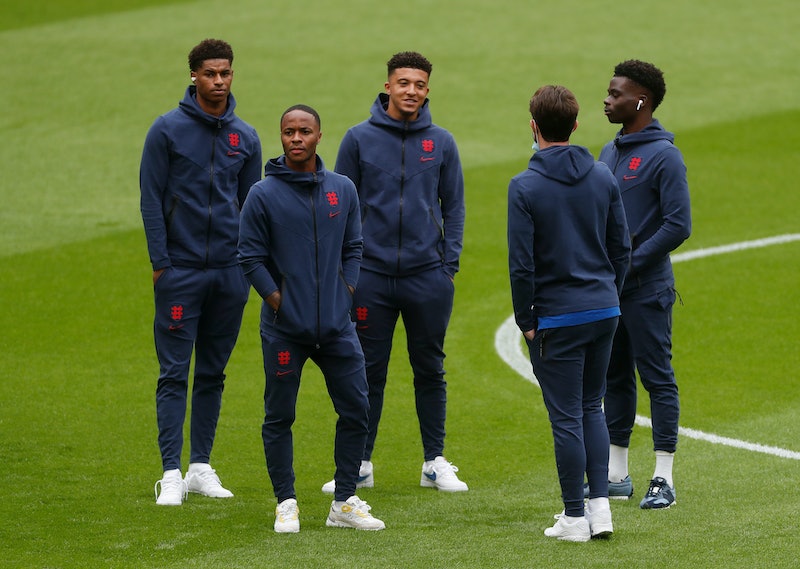 The FA condemned the abuse and actions of some fans during the Euro 2020 Final, writing, “We could not be clearer that anyone behind such disgusting behaviour is not welcome in following the team. We will do what we can to support the players affected while urging the toughest punishments possible for anyone responsible.”

England’s governing body implored the government to bring in “appropriate association” so that any abuse has “real-life consequences”, and that social media companies “need to step up and take accountability” for the actions of its users.

“We’re disgusted that some of our squad – who have given everything for the shirt – this summer have been subjected to discriminatory abuse online after tonight’s game,” Team England tweeted in response to a statement issued by the Football Association (FA). “We stand with our players.”

Prince William, who watched the match live with Kate Middleton and Prince George, wrote on Twitter “I am sickened by the racist abuse aimed at England players after last night’s match. It is totally unacceptable that players have to endure this abhorrent behaviour. It must stop now and all those involved should be held accountable.”

Prime Minister Boris John tweeted that the players “deserve to be lauded as heroes, not racially abused on social media” and that “those responsible for this appalling abuse should be ashamed of themselves.” Priti Patel also commented about the abuse, saying that she backs “the police to hold those responsible accountable.” However, both Johnson and Patel have been criticised for their lack of support for the team’s decision to take a knee before matches, especially as Patel described the notion as “gesture politics” and that fans had a “choice” over whether or not to boo the players.

The Metropolitan Police, who were present at last night’s event, stated they are aware of the “offensive and racist social media comments” directed towards the players. “This abuse is totally unacceptable, and it will not be tolerated and it will be investigated,” the Met’s official account tweeted.

This isn’t the first time players have been targeted by racist discrimination online. In January 2021, Rashford received a barrage of abuse following a match that ended in a draw. He was again targeted in May after Manchester lost against Villarreal in the Europa League final. The footballer subsequently reported the racist abuse to the police. “At least 70 racist slurs on my social accounts counted so far,” Rashford tweeted. “For those working to make me feel any worse than I already do, good luck trying.”

In April, football clubs, players, and other sporting bodies took part in a four-day boycott of social media as part of the No Room for Racism campaign. “We will not stop challenging social media companies and want to see significant improvements in their policies and processes to tackle online discriminatory abuse on their platforms,” Premiere League Chief Executive Richard Masters said in a statement.

The League says it specifically wants to see changes to the government’s Online Safety Bill. In May, plans were announced that could see social media companies fined up to 10% of their turnover or £18 million if they fail to act against racist hate on their platforms.