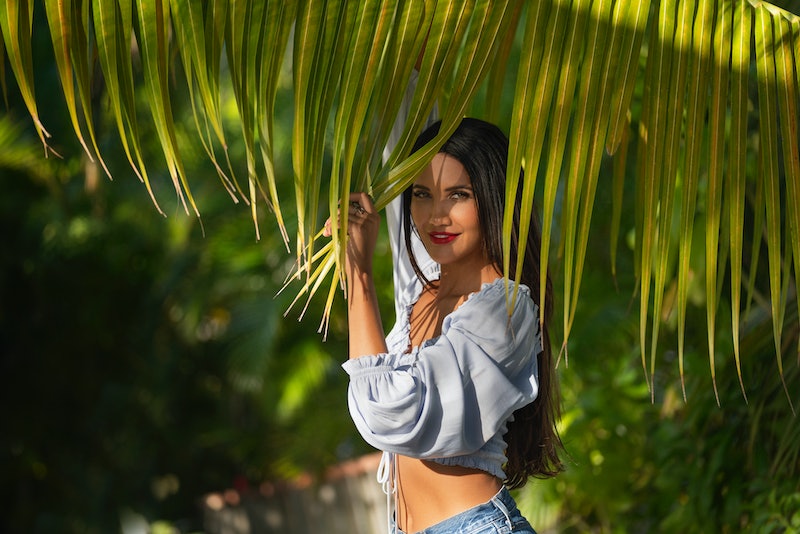 HBO Max’s new dating show FBoy Island follows three eligible women tasked with a nightmare of an experiment. Of the 24 men competing to get to know them, 12 are self-proclaimed “nice guys” looking to fall in love and 12 are f*ckboys only there for a shot at the $100,000 prize. The women have to decipher who’s who while trying to find the right match — ideally with someone who’s there for the right reasons.

The leads include 28-year-old Nakia Renee, 24-year-old Sarah Emig, and 30-year-old CJ Franco, that latter of whom has the biggest social media platform of the three. According to People, CJ signed up for Fboy Island because “her therapist thought it would be a good exercise in mental endurance and resilience” and “she has a history of taming FBoys.” We’ll see if that proves to be true on the show. But in the meantime, here’s everything else to know about the Los Angeles-based model and influencer.

CJ has well over half a million followers on Instagram, where she posts photo shoots, glamour shots, and pictures from exotic locales. She’s clearly no stranger to the spotlight: her personal website showcases her modeling work as well as her foray into both short-form and standup comedy.

According to CJ’s bio on her official website, her modeling pictures have appeared in GQ, Maxim, Esquire, Vogue South Korea, and Sports Illustrated. She took improv classes at the Upright Citizens Brigade in Los Angeles, and has made appearances at the Comedy Store in Hollywood. She’s also a regular on the web series “Evil little Brother” and a guest writer for For Him Magazine, where she gives “her comedic brand of dating advice to men.”

Outside of work, CJ likes to write, walk her dogs, volunteer, go wine tasting, and take shameless photos at all of LA’s trendy hiking spots.

With so many Instagram followers, it stands to reason that CJ is inundated with DMs, and she appears to be a little fed up with it. Her Instagram bio — written in upside down text a la Ariana Grande — reads to “DM for comedy collabs only.”

A January video also gives insight into the kind of man she typically goes for. When she texted her friends to ask what her type of guy is, the responses included, “young, hot, and dumb,” “Mr. needs-to-be-fixed,” and “someone who is emotionally unavailable and has physiological issues but great in bed.” Suffice it to say CJ may have a tougher time on Fboy Island than her therapist seemed to have thought.

She’s fared a little better in the realm of celebrity. In June, she was spotted out with actor Taye Diggs, perhaps hinting she doesn’t find love on the show.

From the FBoy Island trailer, it’s clear CJ didn’t come on the show to play. She vows that she and the other women are going to “sniff out” the troublemakers, noting that one guy is “really cute” but “looks like he’s going to ruin my life,” while another seems like the kind of guy who would have two phones. “My red flags are going off,” she says.

Still, CJ seems to hit it off with contestant Casey Johnson, a 24-year-old IT engineer recruiter from Toledo, Ohio. In one scene, she tells him he seems, “really nice, like really nice”; in another, he feed her grapes and they later share a kiss. Does that mean she managed to find an actually good guy, or — judging by the slew of shocked faces she also gives in the trailer — will she be duped? We’ll have to wait and see.