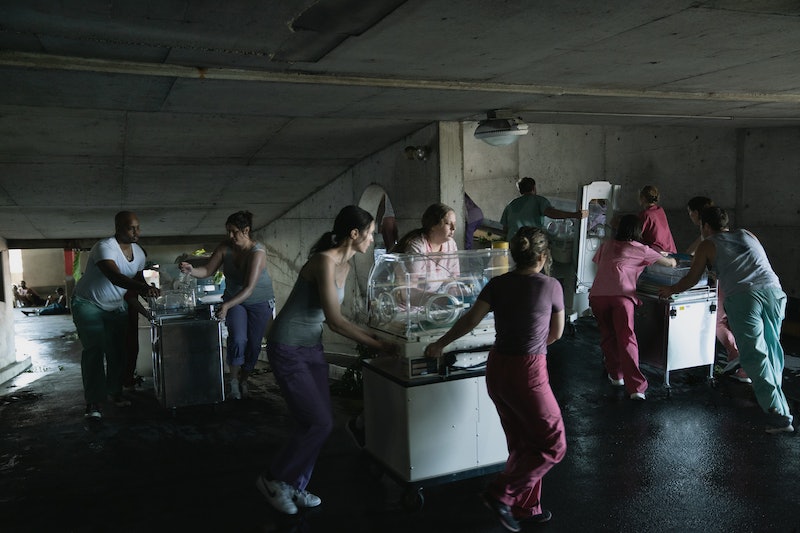 Based on actual events, Apple TV+’s Five Days at Memorial gives a behind-the-scenes account of what happened at one New Orleans hospital in the wake of Hurricane Katrina. In the days after the Category 5 storm made landfall on August 29, 2005, Memorial Medical Center lost power as backup generators failed and temperatures soared to over 100 degrees. Adapted from Pulitzer Prize-winning journalist Sheri Fink’s book of the same name, Five Days at Memorial revisits how a small group of doctors decided, in some cases, which patients would live and who would die, amid a haphazard evacuation effort.

Early on, hospital staff, including the highly respected Dr. Anna Pou (played by Vera Farmiga in the Apple TV+ series), faced the ethical dilemma of prioritizing the order in which patients should be evacuated. According to Fink, the doctors agreed to save babies first, followed by the intensive care unit patients whose lives depended on electricity. They also designated the sickest patients with do not resuscitate orders as the final evacuees.

A few hours after Memorial’s power failed on Sept. 1 — and as the hospital took on feet of floodwater — doctors allegedly determined that hastening the deaths of those too weak to evacuate would be the most humane decision. “Some of the doctors told me that they walked around the hospital, had a look at the situation of the patients and felt that hastening death was the right choice,” Fink explained to NPR in 2013 of the so-called “mercy killings.” More specifically, according to multiple witness accounts, doctors and nurses allegedly injected numerous patients with lethal doses of painkillers, including morphine, until they passed.

More than a week later, the bodies of 45 patients were recovered from Memorial Medical Center’s makeshift morgue, per The Washington Post. Fink reported that five of the deceased were already in the morgue before Katrina struck, though hospital officials have disputed that number. Meanwhile, medical professionals detailed how several of those patients had died because they were too ill to withstand conditions brought on by the stifling heat, as flashlight-holding doctors worked without the necessary equipment. There was also limited food and water available.

Regardless, the number of people found dead at Memorial was significantly higher than at other affected nearby medical facilities, later sparking an investigation. In July 2006, Louisiana Department of Justice agents arrested Dr. Pou and nurses Cheri Landry and Lori Budo in connection with four patients’ deaths. According to NPR, court documents related to the investigation included a pharmacy director’s eyewitness statement detailing how Dr. Pou and others informed him the decision had been made to hasten patients’ deaths. Dr. Pou defended herself on 60 Minutes in September 2006, telling journalist Morley Safer that she was “not a murderer,” instead describing her role to help comfort patients “through their pain.”

“My entire life, I have tried to do good. And my entire adult life, I have given everything that I have within me to take care of my patients,” Dr. Pou — who noted that she does “not believe in euthanasia” — added on 60 Minutes. “I did the best I could under these dreadful conditions that I did not create, but were created by the fact that we were abandoned.”

The cancer specialist faced life in prison, but in July 2007, a grand jury declined to indict her on second-degree murder charges.

More like this
Alleged Cult Leader Larry Ray Is Awaiting Sentencing Following His Conviction
By Brad Witter
The Miraculous Real-Life Thai Cave Rescue Mission Still Resulted In 2 Deaths
By Brad Witter
Glenda Cleveland Died 2 Decades After Trying To Turn In Neighbor Jeffrey Dahmer
By Brad Witter
At 28, Sharon Horgan Was Hoping To See Damon Albarn At The Pub
By Samantha Rollins
Get Even More From Bustle — Sign Up For The Newsletter