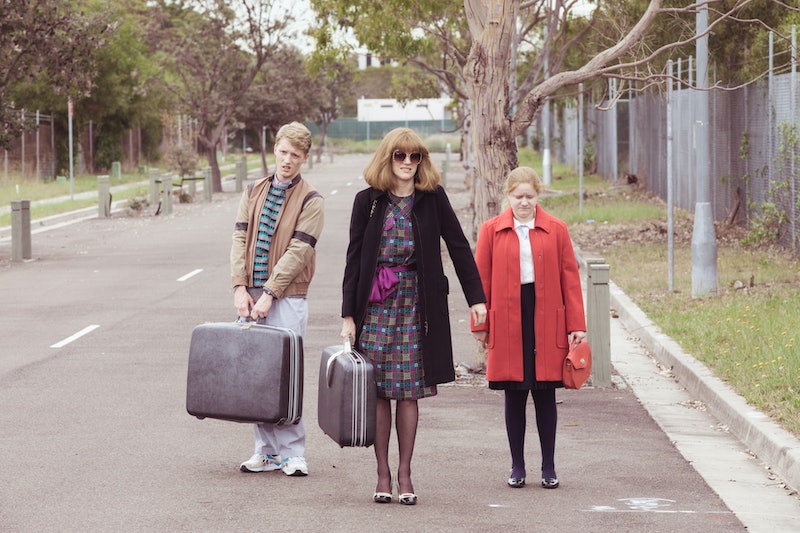 If you thought your life was complicated, just wait until you watch Sarah Kendall's new comedy Frayed, which debuts on HBO Max on July 30. The Australian comedian serves as both the star and creator of the Australian-British series, which centers around Sammy Burbeck (Kendall), a wealthy London housewife who is forced to move back into her childhood home in Australia after her husband's untimely death leaves her and her two children penniless. And while Frayed isn't based on a true story, there are certain characters and aspects of the show that were inspired by Kendall's own life experiences.

For starters, the series is set in Kendall's hometown of Newcastle, Australia. Then there's the character of Sammy's brother, Uncle Jim (Ben Mingay), who spends his days lounging about singing inappropriate songs on his guitar and wearing crude T-shirts bearing phrases like "Freelance Gynecologist." Kendall admits the character is inspired by her own real-life sibling.

"Jim is not that far removed from my brother," Kendall told the RadioTimes. "It's not going to be a huge leap for anyone to know that that is just very much my brother." But that's not an insult by any means. In fact, Jim is one of Kendall's favorite characters in the show, and he becomes more likable the more he appears on screen. "It sounds like a horrible thing to say about my brother at first glance, but actually the more the series wears on and the more you get a handle on Jim as a person, he's a really beautiful guy," Kendall added.

Much like Sammy, Kendall moved from Newcastle to London in her 20s, except instead of marrying wealthy she worked on her career as a standup comedian. But it wasn't until creating the Radio 4 series Sarah Kendall: Australian Tales that the idea of Frayed began to take shape. The project served as a collection of both fictional and semi-autobiographical stories about small-town life in Australia in the late '80s and early '90s, which is very in keeping with the tone and general premise of Frayed.

“I know southwest London really well – I've lived here for 20 years, but also it's so different from where I came from in Australia," Kendall told the Radio Times. "I sort of wanted to do something that even in a fictional way bridged those two worlds."

So while not every storyline or character is based on real life instances, it still contains a decent amount of personal details from Kendall's life to make this dark comedy all the more intriguing to watch.