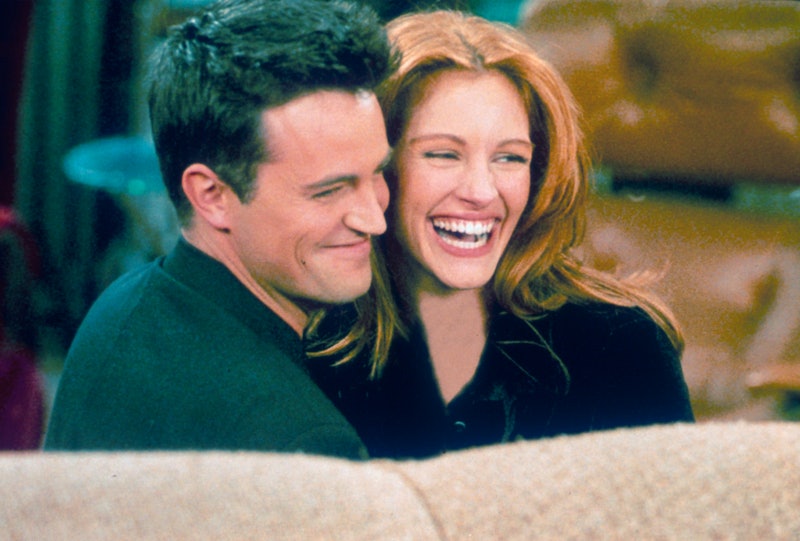 As it turns out, quantum physics informed Julia Roberts' guest role on Friends in 1995. Ahead of this year's Super Bowl, some of the Friends creators, writers, and guest stars reunited to discuss the episode "The One After the Super Bowl" in honor of its 25th anniversary. The episode, which aired after that year's NFL championship, featured a stacked lineup of guest stars; and according to the creators, it was actually Matthew Perry who convinced Roberts to appear on the show as Susie Moss, Chandler's (Perry) former flame out for vengeance.

Friends executive producer Kevin Bright broke down how Roberts ended up on the Season 2 episode in an interview with The Hollywood Reporter on Jan. 28. "Matthew asked her to be on the show, [and] she wrote back to him, 'Write me a paper on quantum physics and I'll do it,'" Bright said. "My understanding is that Matthew went away and wrote a paper and faxed it to her the next day." Alexa Junge, a staff writer on the episode, added that there "was a lot of flirting over faxing" between the two.

"They may have met before the episode, but she was interested in him from afar because he's so charming," Junge said. "She was giving him these questionnaires like, 'Why should I go out with you?' And everyone in the writers' room helped him explain to her why." Junge added, "He could do pretty well without us, but there was no question we were on Team Matthew and trying to make it happen for him."

Perry and Roberts famously dated between 1995 and 1996, but both remained notoriously private about the relationship. Roberts did, however, offer a rare statement about the coupling while on The Late Show With David Letterman in 1996, revealing that she was initially intimidated by Perry "because he's awfully clever and funny and handsome."

Jeff Astrof, a writer on the episode, reflected on the coupling with THR. "I remember standing with her on the sidelines. She kept saying, 'Chandler's so funny!'" he recalled. "And I'm like, 'I wrote every one of those lines!' I don't know if she fell in love with Matthew on the spot but they soon started dating." Astrof added of his thought process, "Chandler is going to date Julia Roberts and I'm going to go home to my horrible girlfriend. That's my memory of that episode."

More like this
'Friends' Star Maggie Wheeler Offers Support To Matthew Perry After Reading His Memoir
By Alyssa Lapid
At 28, Debra Jo Rupp Was Living A Much Different '70s Show
By Grace Wehniainen
'Abbott Elementary' Fans Probably Missed This 'Parent Trap' Easter Egg
By Sam Ramsden
Raven-Symoné Addressed Fan Pushback To Her Name's Actual Pronunciation
By Stephanie Topacio Long
Get Even More From Bustle — Sign Up For The Newsletter
From hair trends to relationship advice, our daily newsletter has everything you need to sound like a person who’s on TikTok, even if you aren’t.