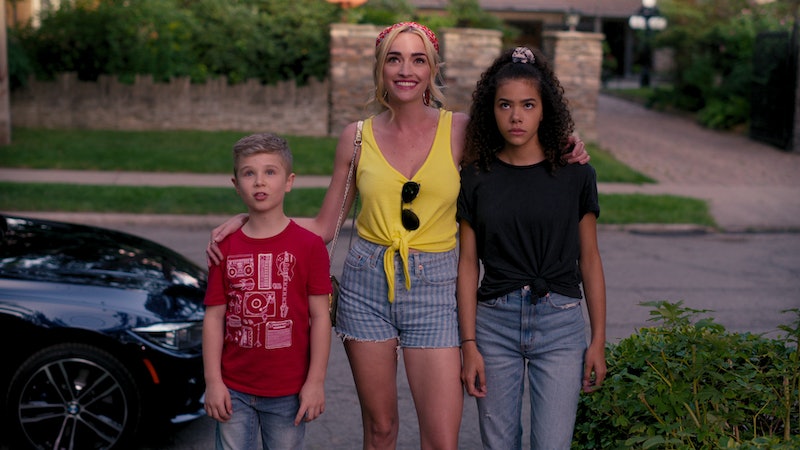 Netflix's Ginny & Georgia may seem like a classic mother-daughter drama on the surface, but it doesn't take long to realize that Georgia Miller has a few more skeletons in her closet than Lorelai Gilmore ever did. When Georgia's wealthy husband suddenly dies and she decides to relocate her kids to a small town outside of Boston, it seems like the fresh start that they've all been looking for. But unsurprisingly, the problems that Georgia was so desperately trying to run from soon catch up with the family in their new town — spelling trouble for her relationship with her daughter Ginny.

Add in two different sets of love triangles (one for Georgia and one for Ginny, of course), some classic teenage drama, and a little mystery and intrigue, and you've got Ginny & Georgia. Here's a guide to the cast of characters that populate this small New England town.

Brianne Howey stars as Georgia, the mother to Ginny and Austin who's reportedly a bit of a grifter. Although Ginny & Georgia is Howey's first leading role, she's also known for portraying Reagan in the CW's Batwoman, as well as Shauna Babcock in FOX's The Passage.

Prior to Ginny & Georgia, Antonia Gentry was best known for her role as Wendy in the Netflix series Raising Dion. In a recent interview with W Magazine, Gentry discussed the portrayal of Ginny in the series. "I didn’t feel like Ginny [was] a token,” she remarked. “When we do bring up her more serious struggles, whether it be with her mom, self-harm, or her identity, it’s not done for shock value. It’s understated, but it’s still serious."

Diesel La Torraca plays Austin, Georgia's son and Ginny's younger half-brother, who reportedly loves the Harry Potter series (notice his glasses?). La Torraca may be young, but he's been building up his resumé — most recently, he was in the film Little Monsters and the limited series Lambs of God.

Maxine, who lives in the same neighborhood that the Millers move into, is one of Ginny's friends at her new school. Actor Sara Waisglass, who has been on-screen for over a decade, is best known for her role as Frankie Hollingsworth in Degrassi: The Next Generation and Degrassi: Next Class. More recently, she was in the Netflix series The October Faction as well as the Holly Hobbie television series.

Australian actor Felix Mallard plays Marcus, the stoner twin brother of Maxine who also develops a connection with their new neighbor Ginny. Mallard is known for his role as Ben Kirk on the Australian soap opera Neighbours, and also recently starred in the CBS series Happy Together as well as Netflix's Locke & Key.

Jennifer Robertson plays Ellen, Georgia's new friend and neighbor who is also the mother of Maxine and Marcus. Robertson is perhaps best known for her role as Jocelyn Schitt in the Emmy-winning comedy Schitt's Creek, but the Canadian actress has a long history of comedic acting work.

Actor Scott Porter is best known for his role as Jason Street in NBC's Friday Night Lights, as well as for starring in the CW's Hart of Dixie. In Ginny & Georgia, Porter plays Paul Randolph, the mayor of the Massachusetts town where the Miller family lives and a potential romantic partner of Georgia's.

In Ginny & Georgia, Canadian actor Raymond Ablack portrays local restaurateur Joe, who quickly forms a connection with Georgia. Ablack, who has been acting since he was a child, is most known for his roles in series including Narcos, Orphan Black, and Shadowhunters.