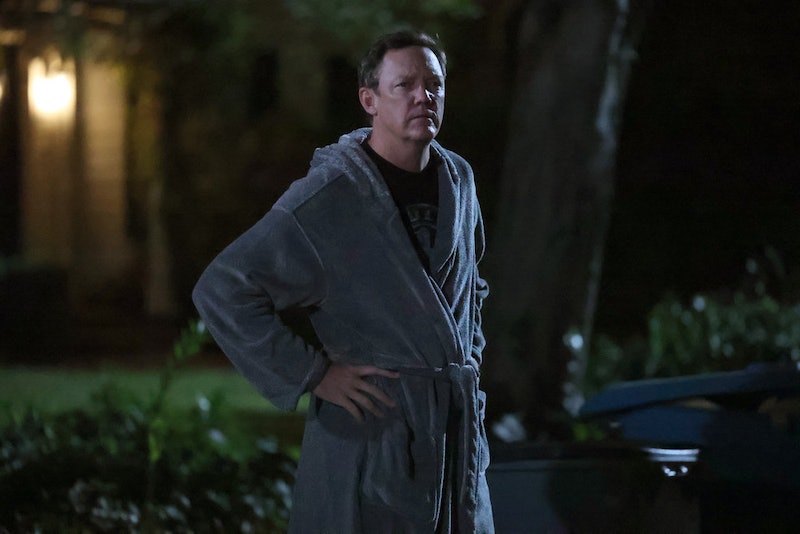 Spoilers for Good Girls Season 4, Episode 3. Dean’s not getting out of jail any time soon. Though he’s not responsible for Beth using their hot tub store to launder cash, he took the fall in Good Girls’ March 21 episode — seemingly to protect his wife. Once he learned that Agent Phoebe Donnegan knew Beth was the one pulling the strings, he submitted his guilty plea. But his decision to go down for his wife’s crimes may also have had something to do with his desire to prove that he’s not easily manipulated.

When Phoebe talked to Dean, she tried to explain that people like Beth use people around them as pawns. That’s true, but Dean probably doesn’t want the world to know that. Beth already cheated on him (even though he did that first) and then used his new store for illegal activities under his nose. He may have seen pleading guilty as an opportunity to prove she’s not running things and to finally take credit for something — even if that something is a crime.

It also sounds like Dean will find a group of friends in prison who feel similarly about the women in their lives. “Dean himself sort of falls into a group of guys who really sort of want to take back the night in terms of fighting back against feminism — men’s rights,” co-showrunner Jenna Bans told TV Guide. “These suburban dads sort of wrongly feel that they’ve been wrongly taken advantage of by the feminist movement.” Krebs added in the same interview that, “Dean believes that he’s going through a victimization of men. He finds an unlikely group of people who agree with him.”

That unlikely group is probably made up of his fellow inmates, because Dean hinted to his kids that he was making friends. As for how long he’ll be in jail — it certainly seems like a long-term situation. Understanding that she could no longer lie to her children about Dean’s whereabouts because he’s not coming home any time soon, Beth took them to visit their dad in jail at the end of the episode.

When Beth tried to get Rio’s help in freeing Dean, Rio seemed unconcerned. He told Beth that Dean would probably make a deal and do “three years [in] Club Fed,” which is a slang term for a cushy sentence handed out to celebrities and white collar criminals. “It’s kind of like a junior college setting,” Wall Street Prison Consultants founder and director Larry Levine told the Washington Post. “I don’t want to call it a stress-free environment, but it’s a lot of hanging out with the other inmates, you know, just bullsh*tting.”

However, there’s a chance that Dean could get out way sooner. At the end of the March 21 episode, Phoebe picked up a family photo of Beth, Dean, and their kids. On the back of the photo are the instructions Beth left for Dean to carry out the counterfeiting business if anything were to happen to her. If Phoebe flips that photo over and finds the letter, she could have proof that this whole thing was orchestrated by Beth, not Dean. The synopsis for the next episode reads, “Phoebe inches closer to the trio's entire operation, which allows the Secret Service to make an interesting deal with Beth.” Perhaps that deal is for Beth to take her husband’s place in prison. But either way, one of the Boland parents is probably going to spend a lot of this season locked up.

More like this
This 'Derry Girls' Reunion Has Delighted Sister Michael Fans
By El Hunt
At 14, Pauline Chalamet Fell In Love & Danced ‘The Nutcracker’
By Grace Wehniainen
La Luz Del Mundo Leader Naasón Joaquín García Addressed His Followers From Prison
By Brad Witter
William Reece Committed Another Murder Not Seen In 'The Texas Killing Fields'
By Grace Wehniainen
Get Even More From Bustle — Sign Up For The Newsletter