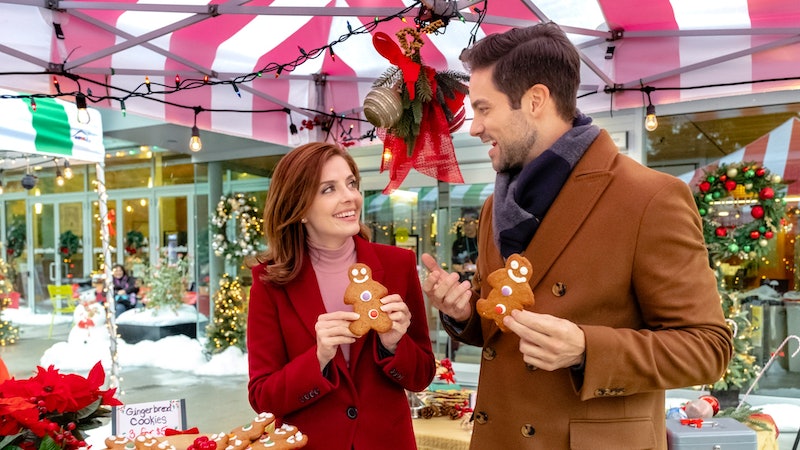 'Tis the season for holiday romance movies from Hallmark and Lifetime — but if you were hoping to see an LGBTQ romance take the lead, you might be disappointed. Hallmark responded to the lack of LGBTQ representation in their holiday films by sharing their commitment to improving diversity across their future original movies after an article from The Wrap pointed out that all of their new offerings center on straight couples. According to the outlet, 40 new Christmas-themed movies will premiere across the Hallmark and Hallmark Movies & Mysteries channels during the 2019 holiday season, but not one of them will feature an LGBTQ character in a leading role.

Executives at Hallmark's parent company, Crown Media, told The Wrap that they are aware of the films' lack of representation, and hope to rectify the issue in future years. "We are continuing to expand our diversity,” Michelle Vicary, executive vice president of programming for Crown Media Family Networks, said in a statement. "We are looking at pitches for LGBTQ movies … and we are looking to expand and represent the United States as a whole."

As disappointing as Hallmark's lack of inclusion is, they're sadly not alone; The Wrap reported that none of Lifetime's original offerings for 2019 feature an LGBTQ couple in the main storyline. While there are four films that feature a same-sex couple in a supporting capacity, overall, their movies tend to be overwhelmingly straight. Meanwhile, only one of Netflix's new holiday-themed movies features a same-sex romance — Let It Snow — and that relationship was not originally part of the 2008 young adult novel that inspired it.

A lack of representation in holiday movies is sadly nothing new, as a recent viral Twitter thread about the 2004 film Too Cool For Christmas proved. According to the movie's IMDB page, two versions of the film were produced; the Canadian version, titled Too Cool For Christmas features a gay couple as the main character, Lindsay (Brooke Nevin)'s parents, and a second version, released in the US, named A Very Cool Christmas. In the latter, Lindsay's parents are a heterosexual couple, though nothing else — including the dialogue — was changed. Shazam director David F. Sandberg shared a clip of the two films side by side on Twitter, showing how similar the two versions truly are by streaming Too Cool on Amazon Prime and Very Cool on Hulu at the same time.

While it might be easy for some to excuse the changes made to Too Cool For Christmas as a symptom of the time period and the more "conservative" American attitudes towards same-sex relationships, there's no reason for channels like Hallmark and Lifetime to continue to ignore LGBT relationships in their holiday programming. In GLAAD's annual "Where Are We on TV" report, the organization noted that though "20% of Americans between the age of 18 and 34" identify as a member of the LGBTQ community, only "10.2% of series regular characters" in the 2019-2020 TV season are openly gay.

There's still a major lack of LGBTQ representation on TV, both in regular primetime programming and in holiday-themed television movies. However, the consistent lack of queer relationships in those films perpetuates the idea that anyone who doesn't identify as straight doesn't deserve to see themselves represented onscreen or falling in love.

Thankfully, it looks like there are some signs of progress and diversity on the horizon; according to The Wrap, Hallmark's 2019 lineup features multiple leading roles played by people of color, as well as some films centered on Hanukkah, while nearly all of Lifetime's offerings feature a character of color in a main role. Meanwhile, Freeform announced in early November that their first original Valentine's Day movie, The Thing About Harry, will center on a gay couple whose rivalry gives way to love.

Still, these steps forward for diversity don't fully represent the audiences watching at home, nor the population of America. At least the executives at both Hallmark and Lifetime recognize that they need to do better in the future — hopefully, they will follow through on that promise in 2020.

More like this
What's New On Netflix: A Third '365 Days' Movie & Lili Reinhart’s New Film
By Arya Roshanian
What’s New On Netflix: 'Never Have I Ever' & 'Indian Matchmaking' Return
By Arya Roshanian
Everything To Know About The HBO Max & Discovery+ Streaming Service Merger
By Brad Witter
'It’s A Sin's Real-Life Jill Has An Important Message About Monkeypox
By Sam Ramsden
Get Even More From Bustle — Sign Up For The Newsletter