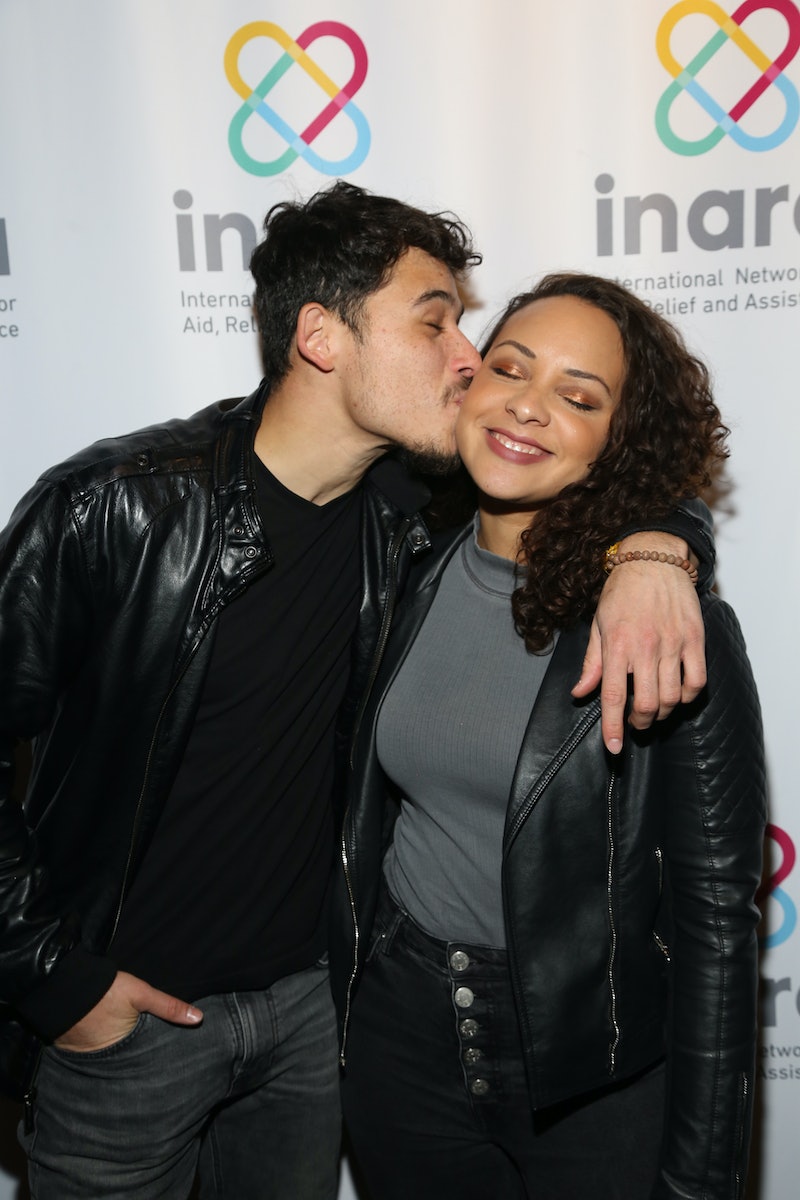 If you've fallen down the Hamilton rabbit hole since its launch on Disney+, then odds are you've also become aware that Anthony Ramos and Jasmine Cephas Jones are actually engaged in real life. Jones portrayed the dual roles of Peggy Schuyler and Maria Reynolds in the original Hamilton production, while Ramos took on the joint parts of John Laurens and Phillip Hamilton. Oddly enough, the characters never interact with each other onstage; however, that didn't stop the actors themselves from developing a romance behind-the-scenes during Hamilton's initial run on Broadway back in 2015. And the rest, as they say, is history.

Since then, the couple's relationship has only grown stronger over time. Ramos and Jones announced their engagement via Instagram on Jan. 4, 2019 with heartfelt messages to each other. "Thank you for saying yes to writing stories together for the rest of our lives," Ramos wrote on his account. "I'm honored and Blessed to marry you."

For her part, Jones had just as sweet words to say about Ramos as well in her own Instagram post. "My beloved Anthony, On Christmas Eve you got down on one knee and proposed to me in front of my favorite castle in Arundel that I used to visit all the time as a child," she wrote. "I love you beyond words and am so excited to continue this awesome journey with you."

But just in case hearing their accounts of the romantic moment isn't enough, the duo have also made the actual proposal available on YouTube, and it's a must-watch for Hamilton fans — both new and old.

"I love you so much. I want to spend the rest of my life with you," Ramos is shown saying to Jones as he gets down on one knee while fighting back tears. "You're the angel of my life. Will you marry me?" Jones, of course, said yes immediately and got to celebrate the happy day while surrounded by her family. Ramos clearly took a lot of time and made a great deal of effort to make sure this surprise went off without a hitch, and as you can see by Jones' reaction, all that hard work proved to be a success.

“Wishing them obviously the best, most luck in the world,” Jones’ cousin said in the footage following the proposal. “But they don’t need it really because they’re so perfect for each other. We’ve been waiting for it for years, haven’t we? It was a given.”

No official wedding date has been revealed at this time, though they've already ironed out a few of the most important details regarding the big day, especially when it comes to the music. “Jasmine and I both love music, so the DJ’s gotta be on point,” Ramos told Vogue in October 2019. “I want people sweating, suit jackets off, chancletas on.”

Clearly, these two aren't throwing away their shot at happiness together.