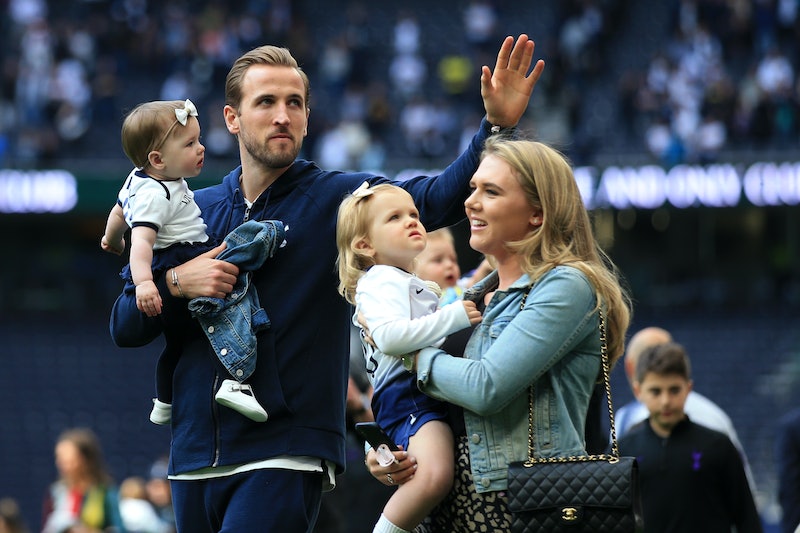 In a snap that’s now gone viral, an 11-year-old Harry Kane is pictured in 2005, standing next to David Beckham (when the legendary footballer’s hair was in its “curtains” style), and a friend from school, Kate Goodland. As the epic story goes, more than sixteen years later, Harry Kane followed in his idol’s footsteps to become captain of the England team, and, what’s more, Kate is now his wife. Kane’s life story sounds like the start of a movie, and because we’re all invested, how exactly did Harry Kane meet his wife Kate Goodland?

Well before Harry Kane was leading the charge for the England national team, the footballer attended school in London’s Waltham Forest where he met his childhood sweetheart Kate Goodland.

Goodland, who is a personal trainer with a sports science degree, has witnessed his “crazy” rise to football stardom from the very beginning. Back in 2015, the celebrated footballer, who kickstarted his career at Tottenham, told Esquire, “ We went to school together, so she’s seen my whole career. Of course, she’s finding it a little crazy. I think she’s even been in the papers a couple of times taking the dogs out,” he said.

While they had met in childhood, the couple officially started dating in 2011, before Kane, per The Sun, popped the question in 2017 on a holiday in the Bahamas. The pair both posted the photos to Instagram, and, well, it’s a pretty emotional scene.

The engagement had followed the arrival of their first child, Ivy, in January 2017 and Kate had marked the moment by posting a gorgeous black and white photo of the family of three alongside a caption reflecting on her “amazing water birth” and becoming a first-time mum.

Soon after, the happy parents also welcomed baby Vivienne Jane to the family fold in 2018, before they finally wed the following year, with Kane sweetly announcing on social media that he had married his "best friend". On Instagram, Kate shared her romantic wedding photos with the caption, “A month ago today I married my soul mate, one of the best days of my life! Thank you for making my dreams come true, you are perfect @harrykane.”

Harry and Kate Kane’s love story is certainly an epic one and comes complete with two pet pooches, called Brady and Wilson.

As the Euro’s 2021 continues, Goodland has been supporting her England goalscorer husband from the sidelines, posting photos cheering him on. Meanwhile, though Kane has clearly been busy with the current nail-biting tournament, he has still made sure to celebrate his wedding anniversary. On Instagram, (June 19), he posted a photo of Kate with the simple caption, “Happy Anniversary.”