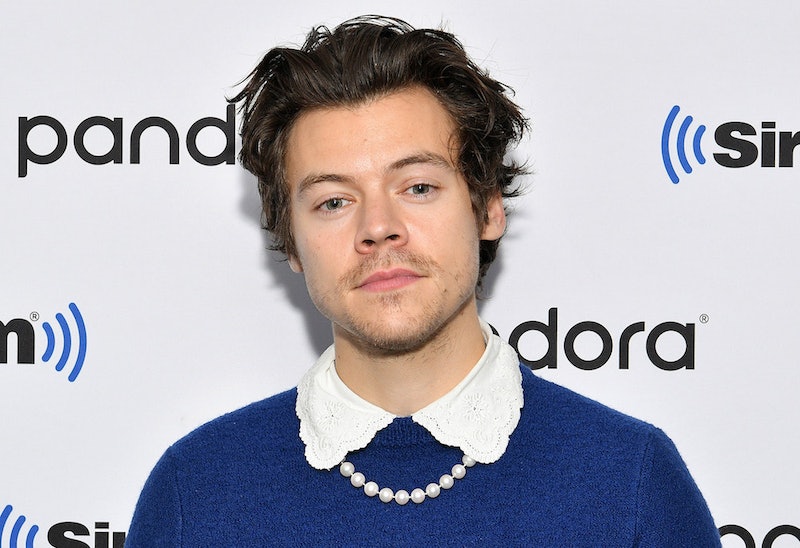 Grammy nominee Harry Styles had a golden response to Candace Owens' call to "bring back manly men" in the wake of his Vogue cover. Styles, who was recently hailed as Variety's Hitmaker of the Year, spoke to the publication for a cover story on Wednesday, Dec. 2, about quarantine, the music industry, and of course, fashion. The British singer-songwriter also shared a photo from the spread on Instagram, which included a not-so-subtle nod to Owens in the caption.

In the image captured by photographer Parker Woods, Styles dons a blush blue Palomo Spain suit over a white frill Gucci shirt. The "Watermelon Sugar" singer's affinity for fruit is front and center as he munches on a banana. "Bring back manly men," he captioned the post — a direct response to when the conservative commentator used those same words when retweeting Styles' Vogue cover story last month.

"There is no society that can survive without strong men," Owens wrote. "The East knows this. In the west, the steady feminization of our men at the same time that Marxism is being taught to our children is not a coincidence. It is an outright attack." "Bring back manly men," she added.

Beyond his Instagram post, Styles addressed Owens' comments in the Variety interview. "To not wear [something] because it's females' clothing, you shut out a whole world of great clothes," he said. "And I think what's exciting about right now is you can wear what you like. It doesn’t have to be X or Y. Those lines are becoming more and more blurred."

Styles said something similar in his Vogue cover, too, citing David Bowie, Elton John, Prince, Freddie Mercury, and Elvis as his fashion inspirations. "As a kid it was completely mind-blowing," he said of the icons' style influence. "Now I'll put on something that feels really flamboyant, and I don't feel crazy wearing it. I think if you get something that you feel amazing in, it's like a superhero outfit."

More like this
Harry Styles’ Red Carpet Looks Have One Thing In Common
By El Hunt
Everything To Know About Taylor Swift’s 10th Studio Album, 'Midnights'
By Grace Wehniainen and Jake Viswanath
Lizzo Twerks While Playing James Madison's 200-Year-Old Crystal Flute Onstage
By Radhika Menon
Stormzy Made A Passionate Speech About The Importance Of Diversity
By El Hunt
Get Even More From Bustle — Sign Up For The Newsletter