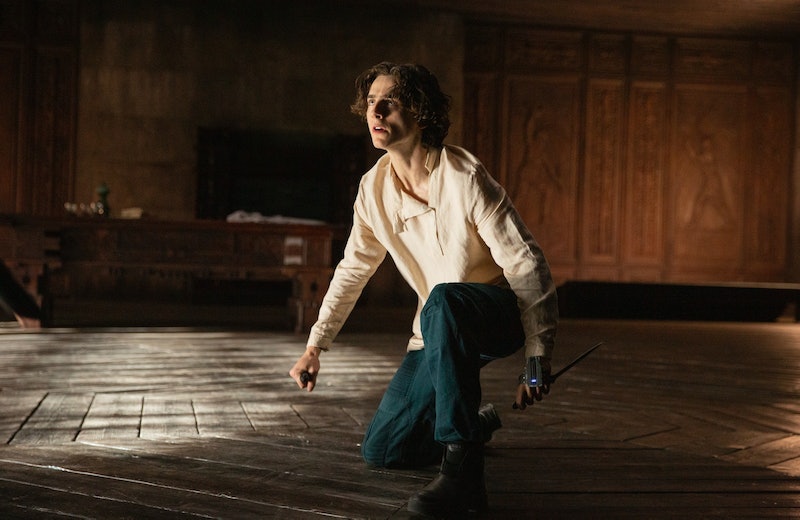 The coronavirus pandemic has wreaked havoc on the entertainment industry, and one production company is making a huge move to ensure their films will be seen no matter what next year. On Dec. 3, HBO Max announced that it will stream Dune, The Matrix 4, In the Heights, and more major Warner Bros. films in 2021. And yes, this does mean that you won't have to leave the comfort of your bed just to swoon over Timothée Chalamet in Dune.

According to The Hollywood Reporter, Warner Bros. plans to put their entire slate of films scheduled for 2021 on HBO Max on the same day that they'll be released in theaters. However, each film will only be available on the streaming service for a one-month window following its release. Other highly anticipated movies that will receive this treatment include The Suicide Squad, Godzilla vs. Kong, Space Jam: A New Legacy, Tom & Jerry, and Mortal Kombat.

In November, the company announced plans to stream Wonder Woman 1984 on HBO Max on Dec. 25, the same day that it's scheduled to hit select theaters. The film faced multiple delays due to the coronavirus pandemic, and it wasn't the one. Many of the movies that will stream on HBO Max next year, including Dune and In the Heights, were postponed from their original 2020 theatrical release dates. Dune is now scheduled to be released on Oct. 1, 2021, while In the Heights will be available on June 18.

Warner Bros. has promised that this release model would only be applied to 2021 movies because of coronavirus safety and the reality that movie theaters will not be open at full capacity. "No one wants films back on the big screen more than we do," the studio said in a statement shared with THR. "We know new content is the lifeblood of theatrical exhibition, but we have to balance this with the reality that most theaters in the U.S. will likely operate at reduced capacity throughout 2021."

Currently, movie theaters are allowed to open in 48 states in the U.S. with limited capacity. However, over 600 movie theaters closed in November due to recent spikes in COVID-19 cases. All theaters in New York City and Los Angeles, the two biggest movie-going markets, have remained shut down.