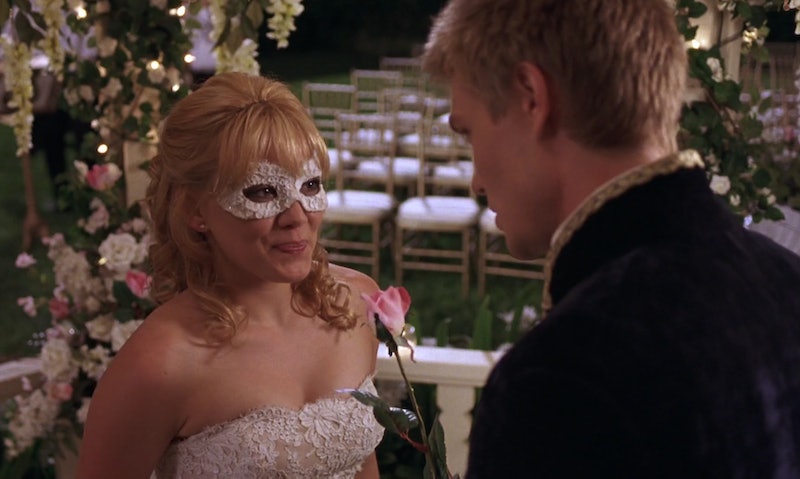 Alexa, play "Hear You Me" by Jimmy Eat World, because Hilary Duff just addressed a major Cinderella Story plot hole that has plagued fans since 2004. In an interview with Cosmopolitan UK published on Tuesday, Oct. 27, Duff reminisced about her role in the Cinderella-inspired rom-com as an outcast named Sam, a Princeton-bound high school teen who begins an AIM and text relationship with a boy. To Sam's horror, the boy turns out to be Austin Ames (Chad Michael Murray), the most popular jock in school — one who lacked proper facial recognition skills.

For decades, fans have lamented Austin's inability to recognize Sam under her flimsy white mask during the masquerade dance scene. As it turns out, Duff is just as confused as fans are. "That is so funny. Maybe [Austin] got hit in the head too many times during football?" Duff joked. "It was pretty recognizably me, right? I don't even know if that was even a question [that came up] on set. I don't know what to say about that. There was definitely a problem with the script there."

Wearing a wedding dress to meet your pen pal at a high school dance is admittedly strange, yes, but the extravagant outfit choice does, in fact, make sense plot wise. In the film, Sam is in desperate need of a last-minute costume in order to attend the dance, so her co-worker and friend Fiona (Regina King) lends her her old wedding dress after she spots the matching white mask in the costume store.

Delightfully so, Murray has also shaded his character’s inability to recognize PrincetonGirl818 behind that teeny tiny mask. While addressing his most baffling teen rom-com movie scenes in an interview with E! News last year, Murray shared his thoughts on the scene. “If you go to a masquerade ball and a girl you see almost every day is wearing a small mask, and her entire face is exposed, and you still can't recognize her, you should probably see an eye doctor,” Murray said. “Among a few other doctors."

For fans keen on reliving PrincetonGirl818 and Nomad609's fairytale romance, A Cinderella Story is available to stream on HBO Max.

More like this
Jennifer Coolidge Just Said The Most Controversial Thing About Legally Blonde’s “Bend & Snap”
By Maxine Harrison
Before 'Bullet Train,' Revisit These Brad Pitt 'Fight Club' Premiere Photos From 1999
By Grace Wehniainen
Jennifer Coolidge Needs 'Legally Blonde 3' To Happen So She Stops Getting Hot Dog Jokes
By Jake Viswanath
Revisit 1992’s 'A League Of Their Own Cast' Photos After The New TV Series
By Grace Wehniainen
Get Even More From Bustle — Sign Up For The Newsletter