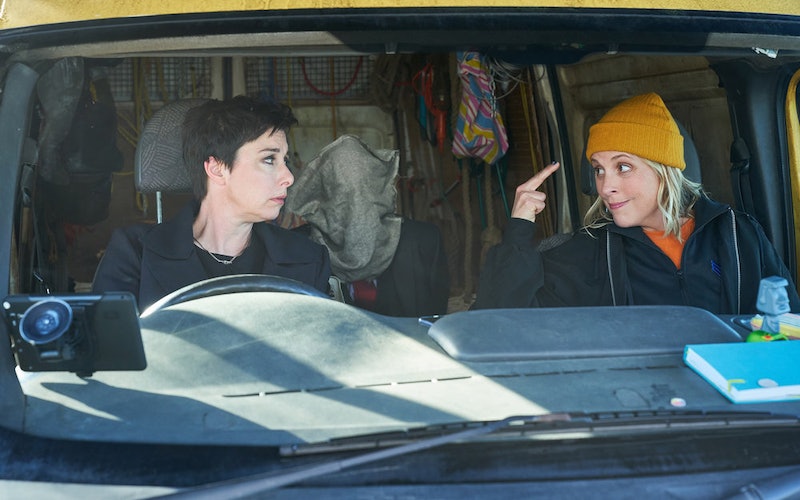 What if Mel Giedroyc and Sue Perkins from the Great British Bake-Off were secretly assassins? OK, so not in real life, but that's the premise of the Sky One series Hitmen, which arrives Aug. 6 on Peacock. The show stars former GBBO hosts Mel and Sue as Jamie and Fran, respectively, who play the eponymous hapless hitmen. And since it's so nice to see the dynamic duo on our screens again, hopefully there will be a Hitmen Season 2.

While Hitmen premiered in March in the UK, there's hasn't been any news of a renewal yet. The series didn't receive great reviews there, and it seems to be faring about the same here in the States, with critics wishing it were a bit funnier. Despite the so-so reception, it's comforting to see Mel and Sue together again — even if they're no longer making some baking-based innuendo on GBBO.

GBBO wasn't the first time Perkins and Giedroyc worked together — the women met at Cambridge in 1988, according to a 1999 Independent article. Perkins recalled meeting her future comedy parter on Giedroyc's birthday at a club. "She was totally off her face: flecks of vomit around her mouth, doing really bad early house dancing, flailing arms knocking everyone over," the comedian said. "She called me Barbara, Sheila, Debbie, didn't have a clue who I was."

Giedroyc, however, remembers it a bit differently, describing Perkins as "a mad, six-stone pixie figure" who came "out of nowhere" at a comedy gig. Perkins "leapt on to the stage... She looked like an alarmed rooster, her hair a cockscomb. She had three [cigarettes] on the go, and obviously had no material. She just grabbed the mic and did this ramble for 15 minutes, and brought the house down. I went up to her and said something very cheesy like, 'Hello Sue, welcome to the bosom of comedy.'"

The two began writing comedy together after graduating from university, eventually hosting several TV shows as a duo — '90s Channel 4 talk show Light Lunch, as well their eponymous ITV series Mel & Sue, which was canceled after one season in 2015. Then, of course, came GBBO, which they left in 2016.

Surprisingly, Hitmen is the women's first sitcom together, according to the Sun. Their characters in the series are best friends, which was one of the things that drew them to the series, Perkins told the site BT. "[W]e've been able to slip our time-worn shtick into a sitcom," she said. "Because Mel and I have been friends for 30 years, it feels like an easy sideways transition into these characters."

But while their chemistry may radiate onscreen, there's no guarantee Hitmen will be renewed. Both stars have a lot on their plates, which may affect any future filming schedules. Giedroyc is set to host a new woodworking competition show for Channel 4 — Good with Wood (no air date had been set as of July 20, per Radio Times). She even launched a podcast, Mel Giedroyc Is Quilting, in February of this year.

Perkins, meanwhile, also has her own podcast, and is set to host a Netflix travel series, which is tentatively titled Perfectly Legal. They had started filming by March of this year, per Deadline, but there's been no word on when it might be released.

One thing's for certain, though: Mel and Sue's friendship isn't going anywhere. "We'll be in touch in 50 years' time," Giedroyc told the Independent in 1999. "I like to see us as washed-up old hams in a home for the terminally ham, talking about the old days. I'll probably have an orange wig, and Sue will be pushing me around in a bathchair. I can't imagine life without her, we'll always be mates."