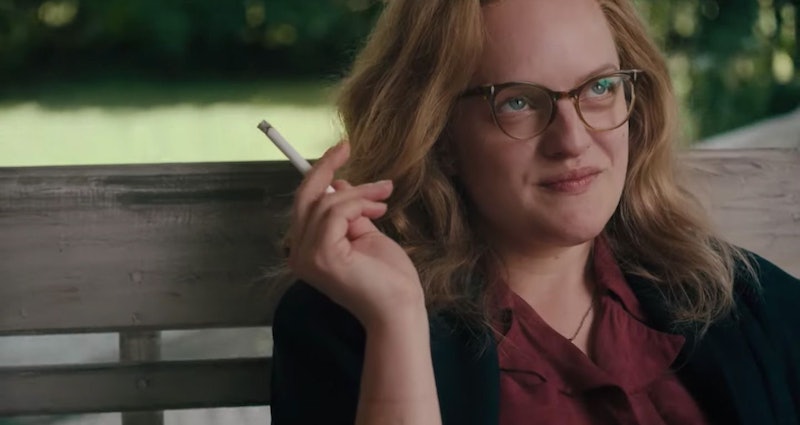 "What happens to all lost girls?" Elisabeth Moss whispers in the trailer for Shirley, before delivering the haunting answer: "They go mad." Given that Shirley is the story of Shirley Jackson, the renowned horror writer most famous for the short story "The Lottery" and the novel The Haunting of Hill House, the movie sounds like it would be one about a woman on the verge of madness. But Jackson's life was a little more normal than the new film Shirley, available June 5, would have you believe. So how accurate is Shirley? Don't watch the movie expecting a true story.

Directed by Josephine Decker, the official synopsis for Shirley states, "Renowned horror writer Shirley Jackson is on the precipice of writing her masterpiece when the arrival of newlyweds upends her meticulous routine and heightens tensions in her already tempestuous relationship with her philandering husband. The middle-aged couple, prone to ruthless barbs and copious afternoon cocktails, begins to toy mercilessly with the naïve young couple at their door."

Michael Stuhlbarg plays Stanley Hyman, Shirley's husband whose ideas of 1950s housewifery were exactly what you'd expect from the time, though he did support his wife's writing career. The newlywed couple, Fred (Logan Lerman) and Rose (Odessa Young), who are invited to stay in their home, are entirely fictional however, created for the dream-like film.

The visiting couple isn't the only fictionalized piece of the film. As Slate points out, Shirley is not "a remotely accurate biopic of the author." Though there are two existing biographies on Jackson, 1989’s Private Demons by Judy Oppenheimer and 2016's Shirley Jackson: A Rather Haunted Life, Shirley screenwriter Sarah Gubbins based her script on the 2014 novel Shirley by Susan Scarf Merrell. The novel weaves events from Jackson's life into a semi-erotic thriller that incorporates the rumors of lesbian dalliances and witchcraft that were a part of Jackson's mysterious reputation.

The resulting movie offers up a gorgeous yet heightened version of Jackson that more closely resembles her own writing than anything that might be printed in either of the biographies. "Shirley Jackson was a real person," Variety writes, "although the version presented in Josephine Decker’s Shirley feels more like a character from one of her own novels."

That's not to say that Jackson didn't battle her own mental health demons throughout her life. As The New Yorker points out, she made much of her money from writing humorous essays on motherhood and marriage for magazines like Good Housekeeping and Woman’s Home Companion, which create the image of a rather happy home life. But "Jackson was miserable a good deal of the time, as indicated by her increasing reliance on alcohol, tranquilizers, and amphetamines. She felt patronized in her role as a faculty wife and frozen out by the townspeople... Most of all, she felt oppressed by her husband."

As a result, much of Jackson's writing touches on feelings of being trapped, with a recurring motif of "a lonely woman setting out to escape a miserable family or a grimly claustrophobic community and ending up 'lost.'"

Shirley may not be an accurate biopic of what happened in Shirley Jackson's life, but if the film more closely resembles her writing, it may certainly be an accurate representation of how she felt.

More like this
Your Guide To Watching 'Everything Everywhere All At Once' In The UK
By El Hunt and Sophie McEvoy
Theo James Would “Love” To Star In George Michael Biopic
By Sam Ramsden
Adam Lambert Called Out The George Michael Biopic Over Potential Casting
By Sam Ramsden
You’ll Definitely Recognise The Stars Of Amy Winehouse’s Biopic
By Maxine Harrison
Get Even More From Bustle — Sign Up For The Newsletter
From hair trends to relationship advice, our daily newsletter has everything you need to sound like a person who’s on TikTok, even if you aren’t.