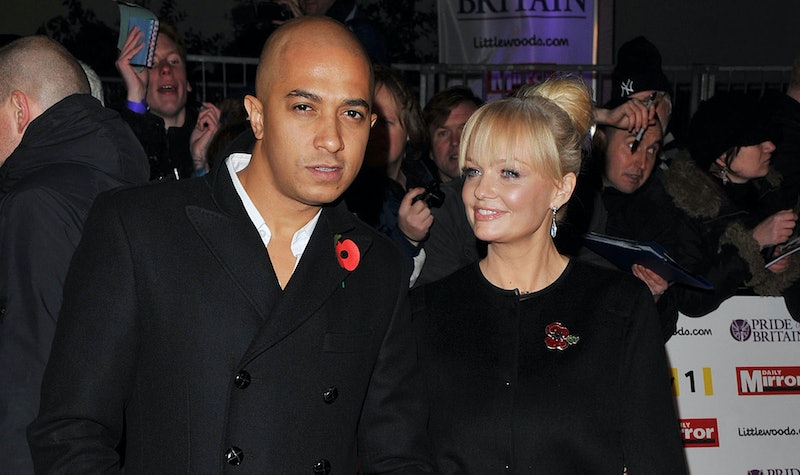 After over two decades of being together, former Spice Girl and presenter Emma Bunton surprised fans with the revelation that she’s married her long-term partner Jade Jones. The pair, who met in the 90s, posed for a picture on Bunton’s Instagram on July 13 which she captioned, “Mr and Mrs Jones” with four red heart emojis.

While the ceremony may have come as a surprise to her followers, Baby Spice has been with her beau, who she’s previously thanked for always supporting her, since her Spice Girls days. So here’s how Emma Bunton met Jade Jones.

Jones and Bunton first crossed paths when Bunton was performing with the Spice Girls and Jones was with the short-lived boy band Damage. As OK! Magazine reports, the pair first started dating sometime in 1998, and were on and off again for a while before rekindling their relationship in 2004. The Independent reports that Bunton and Jones first announced their engagement in Jan. 2006 and a lot has happened during their 15-year engagement.

In 2007, their first child Beau Lee Jones was born and five years later in 2011, they had another child named Tate Lee Jones. And Bunton has indicated that the pair may not be done just yet. In June 2021 she told You Magazine, “Jade was desperate [for another baby] and every Christmas or birthday my two children were like, ‘We want a baby’, and I would say, “It’s not that easy! But it’s something everyone in the family had always wanted, so we were thinking about it more seriously. At the beginning of 2020, we even got out the old box of baby clothing to see what we could reuse.”

As their family has grown, Bunton’s solo career moved from strength to strength. As it was music that brought Bunton and Jones together, it makes sense that they’re a pretty good working duo too. They teamed up on Bunton’s fourth solo album My Happy Place to perform the duet "You’re All I Need To Get By."

“Years ago we did something with Damage but we weren’t in the booth together, but this time we were in there together and it was quite romantic,” she told Metro. "We were hugging and kissing and the producers were like, 'can you just get a room?' So it was really special and romantic." Immortalising their love in song- how sweet.

After all these years, they certainly sound and look super loved up. And fans and famous friends alike were overjoyed to hear that they’d tied to knot. Her Spice Girls family showed up to celebrate their love. Victoria Beckham wrote, “Congratulations love u both so much” and Melanie Chisholm said, “Yeahhhhhh! Congratulations love you all sooooooo much.” Rochelle Hulmes said, “Congratulations beautiful people” and Bunton’s co-presenter Jamie Theakston wrote, “Wait … WHAT” with two heart emojis.

This article was originally published on April 13, 2019