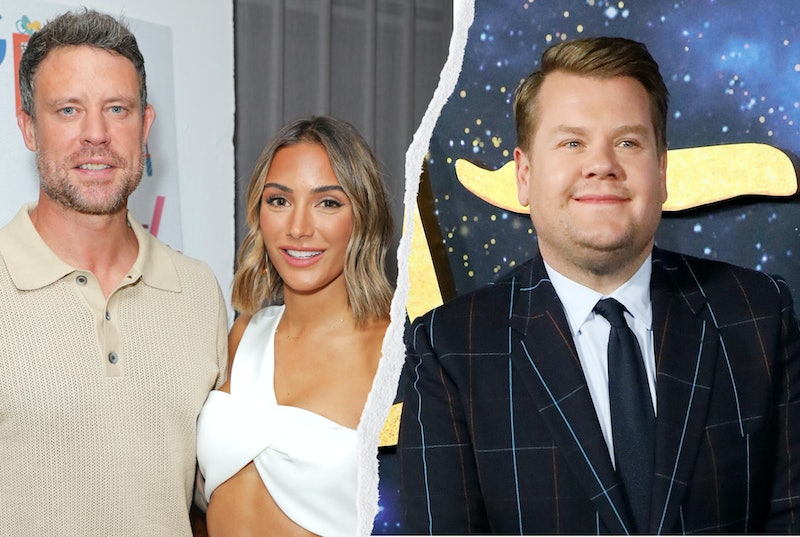 The contestants have finally been announced for this year’s I’m A Celebrity Get Me Out Of Here, and pop star-turned-Loose Women panelist Frankie Bridges is amongst the ten campers heading to Gwrych Castle in Wales.

Earlier this week, Bridge revealed to Instagram that she has been isolating in Wales ahead of the upcoming series, leaving behind her husband Wayne Bridge and their children Parker, eight, and six-year-old Carter. Though she admits to being both “excited” and “terrified,” she’s being cheered by footballer husband Wayne Bridge who appeared on the show in 2016. The pair have been together since 2010 but how exactly did Frankie meet Wayne Bridge?

Cast your minds back all the way to 2010 (when Frankie Bridge still had her pixie cut and The Saturdays were at their peak). It turns out the two got together with help of a cupid named James Corden.

During Wayne Bridge’s stint on I’m A Celeb in 2016, he explained to fellow campers that he was “just on a night out” and actor and presenter James Corden decided to set the two up.

“He got her phone, put my number in it,” he shared at the time. “And then put her number in my phone. And then we basically text a little bit, and just ended up going for dinner.”

Corden’s matchmaking apparently worked as Frankie and Wayne were engaged by 2013, and the proposal sounds just as romantic — and included their pet dogs.

Bridge, 32, previously shared the loved-up moment on Capital Breakfast show in 2017, detailed how her romantic partner whisked her to a hotel before he popped the question.

“Wayne took me to a hotel and he got my dogs involved,” Bridge gushed on the show. “I didn't know my dogs were there and they came in in little bride and groom outfits. And Pixie had the ring around her neck on a ribbon.”

The dog-lover joked that the proposal may be “weird” for those who aren’t dog fans “...so I feel like I only want to tell people who like dogs!” she said, per Hello.

The happy couple got married in a grand ceremony in 2014, and have two children together. Frankie, who hosts mental health podcast Open Mind, often speaks about how her husband is there for her during her battles with panic attacks and anxiety, and the couple have continued to show a united front.

Now, as Frankie prepares to follow in her husband’s footsteps and take on the I’m A Celeb camp, Wayne has been sharing his support. On Instagram, he shared a photo of Frankie in her camp uniform along with the caption, “THAT’S MY WIFE!! Go on Frank!”

More like this
'Love Island' Has Added Yet Another Bombshell To The Villa
By Bustle UK
Molly-Mae & Tommy Fury Revealed Their Baby Girl's "Really Unusual" Name
By Sophie McEvoy and Sam Ramsden
Spencer Matthews’ Impressive Net Worth Expands Far Beyond Chelsea
By Sam Ramsden
Joey Essex Is Rumoured To Be Dating A 'Love Island' Favourite
By Sam Ramsden
Get The Very Best Of Bustle/UK
Sign up for Bustle UK's twice-weekly newsletter, featuring the latest must-watch TV, moving personal stories, and expert advice on the hottest viral buys.