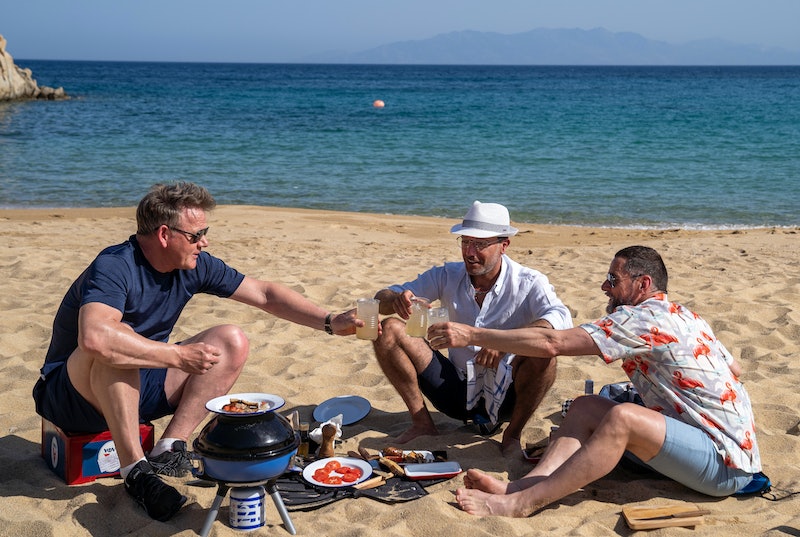 Clearly not content with a UK-based staycation, Gordon Ramsay, Gino D’Acampo, and Fred Sirieix have embarked on yet another culinary expedition as their BAFTA-winning ITV series returns this September.

Following super successful road trips around America and Europe, the trio have completed a “big, fat Greek adventure,” island-hopping between Crete, Santorini, and Mykonos before heading to Athens.

Premiering on Monday, Sept. 27, Gordon, Gino and Fred Go Greek is said to have an abundance of fantastic food, as well as more “bromance and bickering” from the trio. Despite the fact that Gordon, Gino, and Fred love to take the mick out of one another, it’s clear that the three get along exceptionally well. But where did they meet?

Prior to the debut of Gordon, Gino and Fred: Road Trip, which as The Sun reports, first began airing in 2018, Kitchen Nightmares star Ramsay and I'm A Celebrity Get Me Out Of Here's D'Acampo also took part in a hilarious blind taste test on Ramsay's official Youtube channel, which could indicate the TV chefs were somewhat well acquainted. Either way, Gordon, Gino and Fred have become very familiar with one another over the past few years, and as their ITV series approaches its next series, fans can look forward to yet more hijinks from their upcoming trip in Greece.

Speaking about the upcoming series, Gordon said he had a lot of fun “creating havoc” with the boys, telling ITV that it was “great to see the guys, hang out and have fun after the difficult times.”

Meanwhile, Gino said his series highlight was becoming the captain of the trio’s catamaran during the trip. “I loved being able to captain the boat and making the guys say ‘YES CAP!’ to me. We had lots of fun but we also had some lovely, special moments together too.”

Fred, on the other hand, said it was amazing to experience Greek culture first hand. “It filled my head with joy,” he shared.

More like this
Meghan Markle Just Addressed *Those* Wild 'Real Housewives' Rumours
By Sophie McEvoy
We’ve Got A Text! Another 'Love Island' Series Is On The Way
By Darshita Goyal
6 Of Mike Tindall’s Unfiltered & Royally Entertaining Jungle Confessions
By El Hunt
Proud Wife Zara Leads Royal Reactions To Mike Tindall’s 'I’m A Celeb' Stint
By Sophie McEvoy and Darshita Goyal
Get The Very Best Of Bustle/UK

This article was originally published on November 27, 2019