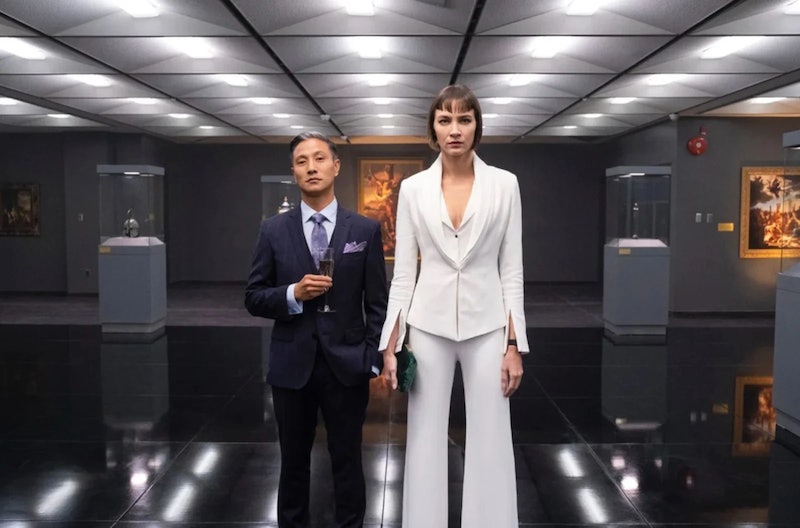 The Marvel Cinematic Universe has completely altered the way fans look at genre franchises. Now, it's expected that every movie and TV show from a brand should interconnect in some way — especially if that brand happens to be Marvel. So how does Hulu's new Marvel TV series Helstrom connect to the MCU? The short answer is it doesn't, but the reason why is complicated.

Ever since the dawn of the MCU, the connections between Marvel's movies and TV series have been tangential at best, even though they were all ostensibly set in the same universe. Agents of S.H.I.E.L.D. had the strongest connections, scoring cameos from a few movie characters — most notably Samuel L. Jackson's Nick Fury. But even that series never really felt like it took place in the same world as, say, The Avengers. Netflix's slate of Marvel shows fared even worse, as they were vastly different in tone and featured characters who wouldn't even say the names of their big-screen counterparts (remember everyone's favorite patriotic hero, The Flag Waver?). Marvel's other live-action Hulu series, Runaways, contains almost no MCU references at all. So it was only a matter of time before a Marvel show like Helstrom came along that exists completely outside the interconnected world of the Marvel Cinematic Universe. If you watch the trailer for Helstrom, about a pair of demon-hunting siblings, you'll see that Marvel branding is nowhere to be found, which is somewhat strange for one of the most powerful brands in entertainment.

Essentially, Helstrom exists as an anomaly. Up to this point, all live-action Marvel TV shows were produced by Marvel Television, which existed as a separate entity from Marvel Studios, which makes the movies. That's why the movies and TV shows never really fit well together; they were made by different studios who weren't really crossing over. But in Dec. 2019, Marvel Television was folded into Marvel Studios. All of the series the studio had been working on were axed by its new corporate overlord Kevin Feige, except for one: Helstrom. Since the series had already begun filming, Marvel Studios allowed the show to be made, but without any Marvel branding. As a result, Helstrom exists in a vacuum. It's a one-off series based on a Marvel comic book but without any connection to the MCU, save for an Easter egg reference to the Roxxon Corporation, a company that figures slightly in the Iron Man films and shows like Cloak & Dagger and Agent Carter.

Other seasons of Helstrom seem unlikely at this point, as the show was produced by a studio that no longer exists and it doesn't match Marvel Studios' vision for the future of the MCU on TV. So, you know, try not to get too attached to this demon-hunting corner of the not-quite-MCU.

More like this
Pamela Anderson’s Dating & Marriage History Could Be Its Own TV Series
By Jake Viswanath
Pamela Anderson's Sons Brandon & Dylan Have Their Own Hollywood Careers
By Arya Roshanian
Wait, Is Barney Stinson Related To Sophie On 'HIMYF'?
By Gretchen Smail
Here’s Everything Coming To & Leaving Netflix In February
By Jake Viswanath
Get Even More From Bustle — Sign Up For The Newsletter
From hair trends to relationship advice, our daily newsletter has everything you need to sound like a person who’s on TikTok, even if you aren’t.