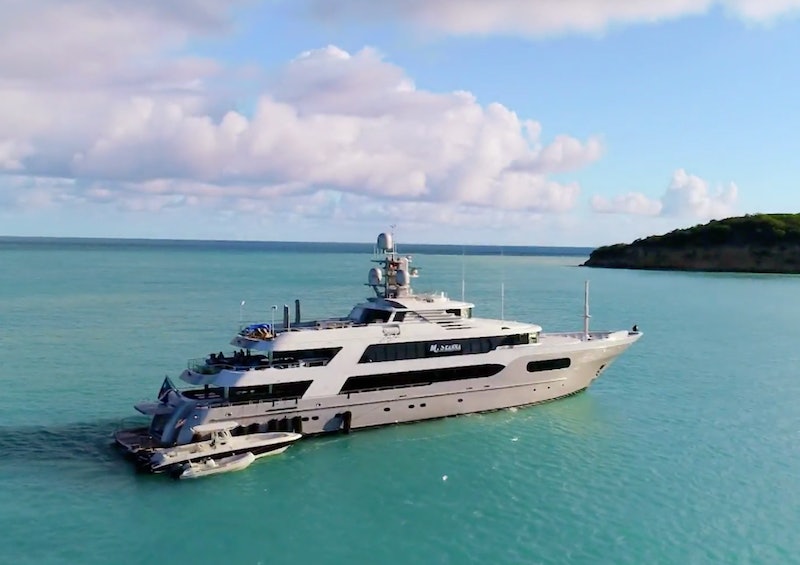 The Below Deck cast is climbing back aboard the My Seanna for Season 9, and yes, it's still just as expensive to charter the ship. The luxurious vessel boasts six cabins for 12 guests as well as numerous amenities including a helipad, on-deck hot tub, movie theater, gym, and beach club, according to the yacht booking company Yacht Charter Fleet. Guests can also explore the ocean with the included wave runners, wakeboard, water trampoline, or snorkeling equipment.

All of that fun will cost you. Yacht Charter Fleet reports that during the summer, chartering My Seanna can run anywhere from $338,000 to $395,000 per week. Winter rates are a bit lower, running between $294,000 and $392,000. The ship sails the Caribbean making stops in the Bahamas in the summer as well as Saint Martin, St. Barts, Antigua, and the Virgin Islands in the winter.

The ship was originally built in 2000 but was renovated in 2014 to add 25 extra feet to the decks, per MegaYacht News. That's the version fans saw in Below Deck Seasons 6 and 8 and will see again in Season 9. It's being captained by both Lee Rosbach and Sean Meagher, who briefly took over for Lee while he was dealing with an undisclosed health issue at the beginning of the season. Meagher, an active broker for Worth Avenue Yachts, was also the listing agent for My Seanna. According to My Boat International, it sold in July 2021 and was listed at $21.9 million.

In 2019, the yacht was being chartered with a 35% discount. That rate is no longer available, but those willing to go on Below Deck may be able to spend a little less. When Below Deck: Mediterranean Season 2 was in production, a casting announcement said that the show was booking groups of guests for a significant charter discount. Instead of paying upwards of $100,000, the trip cost $55,000 for five people, working out to $11,000 each. That only included three days on the yacht, but guests also got to stay in a five-star hotel in Croatia for two days and all their airfare was covered.

So if you happen to have $50,000 lying around, keep an eye on the Bravo casting page. Otherwise, tune in to Below Deck to see all of the drama unfold from the comfort of your couch.

More like this
Yes, That's Christina From 'The Bachelor' In Taylor Swift's "Fifteen" Music Video
By Brad Witter
Rachel Fuda Gave Birth Just Weeks Before 'RHONJ' Season 13
By Brad Witter
All The Clues About Aly & Zach’s Relationship Status After 'The Bachelor'
By Brad Witter
Why Did Brianna Leave ‘The Bachelor’?
By Grace Wehniainen
Get Even More From Bustle — Sign Up For The Newsletter
From hair trends to relationship advice, our daily newsletter has everything you need to sound like a person who’s on TikTok, even if you aren’t.