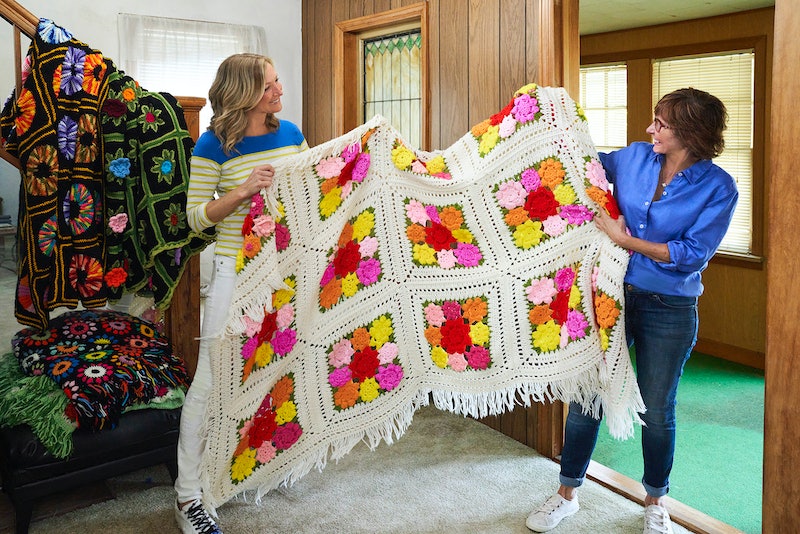 Following in the successful footsteps of decluttering shows like Tidying Up with Marie Kondo and The Home Edit comes HGTV’s Everything But the House, premiering on Friday, March 19. The series, hosted by Flea Market Flip’s Lara Spencer, gives homeowners a chance to clear out their basement or attic clutter and make some money in the process — so basically, the thing you always think about doing, but never actually have the time or patience for. The residents team up with appraisers who walk them through what might be the most valuable items they own, then they get expert help listing and selling those items online. Needless to say, the seven families featured on Everything But the House were pretty lucky to receive this kind of one-on-one decluttering help.

The series isn’t currently casting (as Cincinnati Public Radio WVXU reported, the show already completed production on Season 1 in New York, New Jersey, and Connecticut), but for those hoping to get in on Season 2, it might be possible. The application page for the show is still live, and you can fill it out now in hopes that HGTV contacts you for a future episode if the first season goes well.

But if you can’t make it on the show, you can still work with the company behind it — also called Everything But The House (EBTH). Jacquie Denny and Brian Graves co-founded EBTH in 2008 with the goal of helping people sell their old items online instead of having to rely on local estate sales. To sell your own items with the EBTH, get started with a free consultation. Then, they’ll take care of everything from picking the items up, to listing them, selling them, shipping them, and giving you the cash. You can also shop for your home via the online auction. Every item starts at just $1.

As the Cincinnati Business Courier reported, many people turn to EBTH when downsizing, moving, or just decluttering in general, but there are also those who need the team’s help after losing a loved one.

“This can give people closure,” Denny told WVXU. “For some families, it’s a social archeology. We go through the things with people. We help them decide what they can donate, and how to split up some items with siblings, and which items have the most value.” A someone who has lost a parent, I know firsthand how difficult it is to go through a lifetime of their belongings — not just on an emotional level, but also on a logistical level. In my case, I ended up boxing up most of my mom’s stuff and putting it in storage; a service like EBTH would have come in extremely handy.

Regardless of your circumstances, if you enlist the help of EBTH, you may be surprised by what valuable items have been hiding in your home all along. Or perhaps you’ll get all the inspiration and motivation you need from watching the show on HGTV.