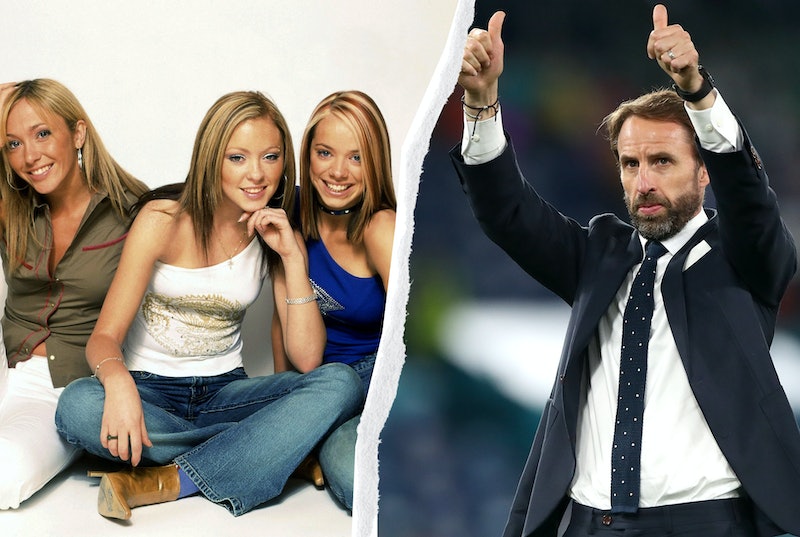 Legendary ’00s girlband Atomic Kitten took to Instagram this morning to announce their new single, which has been written to drum up (even more) football fever in anticipation of the England v Denmark Euros game tonight.

“Southgate You’re The One (Football’s Coming Home Again)” is performed by Jenny Frost, Liz McClarnon and Natasha Hamilton and has been inspired by (you guessed it), England manager Gareth Southgate and his team of players.

The song has been released following a live version being performed at a gig by the band last week. There were calls on Twitter for a full studio version and the girls have delivered.

“It’s been a whirlwind couple of days, but we are super excited and grateful to be able to contribute to the awesome energy and patriotism that is filling the Streets with a brand new version of Whole Again,” the band wrote on Instagram.

“Totally inspired by the England Football fans in support of Gareth Southgate and the super talented England Football team, we Liz, Natasha and Jenny will be singing loud and proud “Football’s Coming Home!”

You can listen to the single on Spotify now to get in the mood for tonight’s game, which, if won, will see England go through to the finals of Euros to play Italy.

It seems as though fans can’t get enough of this unlikely football anthem, which has been bringing back all the nostalgia, and has also prompted calls for an Atomic Kitten reunion.

“New music? New album? A comeback? I want EVERYTHING,” commented one Instagram user.

“If you’re not listening to Atomic Kitten’s remix of their own song ‘Southgate you’re the one are you even an England fan?” one person asked on Twitter. “On repeat. All day. Big up, Atomic Kitten!” said another.

“This has made me the happiest person in the world #ENGLAND” wrote one very enthusiastic listener, with another saying “can’t believe atomic kitten have actually gone and recorded a southgate version of whole again i’m screaming.”

More like this
The David Beckham Qatar Controversy, Explained
By Sophie McEvoy
Mollie King & Stuart Broad Just Shared The First Pic Of Their Baby
By Sophie McEvoy
The Truth Behind Olly Murs' Controversial "I Hate You When You're Drunk"
By El Hunt
Charlie Puth’s “Loser” Is Based On A Heartbreaking Real-Life Text Message
By El Hunt
Get The Very Best Of Bustle/UK