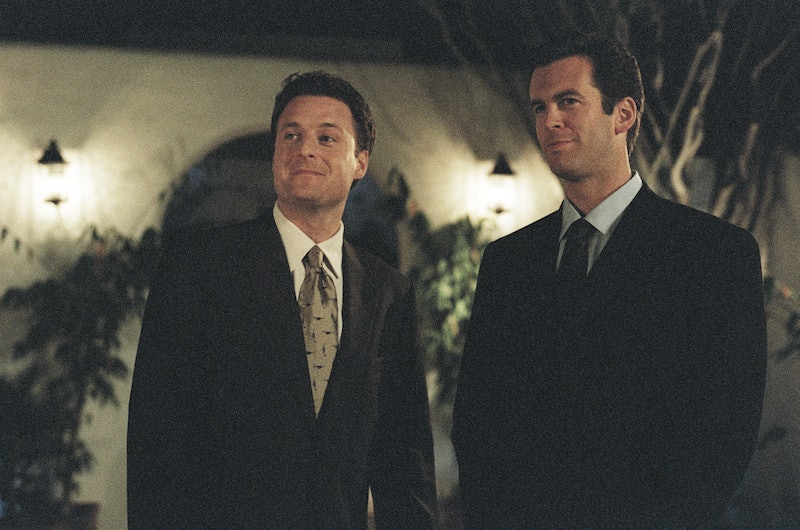 If you've been thirsting for new Bachelor Nation content in quarantine, that's understandable — The Bachelor and its spinoffs have been on the air for nearly two decades, often airing more than one season per year. So if you'd like to dig deep into Bachelor lore, it's best to start from the beginning by streaming Alex Michel’s Bachelor season.

Though the season, which aired in March 2002, only consisted of six episodes rather than the standard 10 and the finale didn't end in a proposal, the first Bachelor season still managed to deliver a blueprint for the kind of drama we've come to relish from the franchise. And though the inaugural season definitely needed to work out some kinks in the show's format, it also introduced us to Trista Rehn, who would go on to become the first Bachelorette and set the standard for how to find lasting love within the franchise.

Typical streaming platforms like Netflix, Hulu, and Amazon Prime Video don't have Michel's season available to stream. However, the streaming service Tubi has got your back. While it only has a select few seasons from The Bachelor and The Bachelorette franchises, but Michel’s is one of them — and best of all, it's available for free. Other seasons also available on the platform include Trista Sutter's and Rachel Lindsay's Bachelorette seasons as well as Arie Luyendyk Jr.'s Bachelor season.

Unlike many former Bachelors who have gone on to create strong social media presences, Michel has chosen to mostly fly under the radar since his time in the spotlight. After giving Amanda Marsh his final rose during the finale (which did not include a proposal), the pair broke things off after several months of dating. Since then, Michel has been living in Washington D.C., according to Us Weekly, where he serves as a media industry executive. And yes, he still appears to be on the market.

It’s not the happily ever after fans of the show have come to hope for, nor was it probably the ending Michel himself expected, but that’s all part of what makes these journeys so intriguing: the unpredictability. So whether you're a longtime fan or had yet to join Bachelor Nation so early in the franchise’s history, watching Michel’s season is definitely worth your time and attention — if for no other reason than to see how much the show has changed.

More like this
'Bachelor' Star Cassie Randolph’s Sister Is In The 'Yellowstone' Spinoff '1923'
By Grace Wehniainen
The Bachelor’s Christina Mandrell Comes From One Of Country Music’s Most Famous Families
By Brad Witter
'The Bachelor' 2023 Schedule Differs From Last Season In 1 Key Way
By Grace Wehniainen
This ‘Bachelor’ Spoiler Teases The Dramatic Self-Elimination Of A Fan Favorite
By Grace Wehniainen
Get Even More From Bustle — Sign Up For The Newsletter
From hair trends to relationship advice, our daily newsletter has everything you need to sound like a person who’s on TikTok, even if you aren’t.