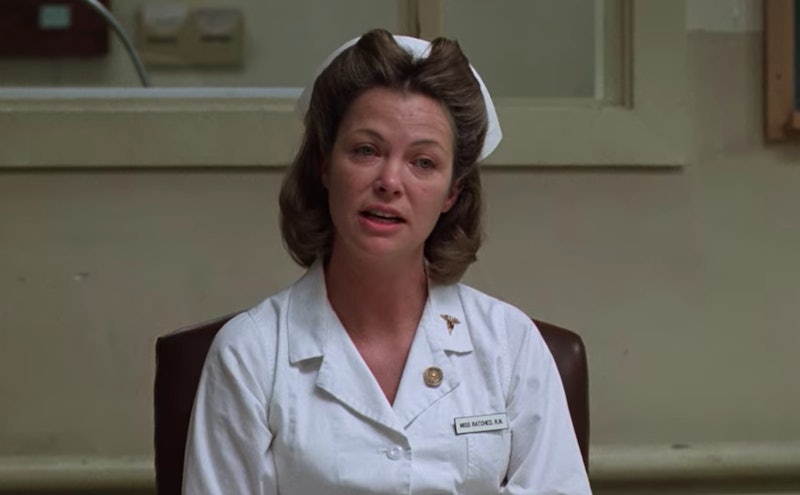 If you've never seen the 1975 Oscar-winning classic, One Flew Over the Cuckoo's Nest, you'll want to stream it before diving into Ryan Murphy's TV prequel to the story, Ratched. The Netflix series stars Sarah Paulson as the villainous Nurse Ratched and aims to explore "how this monster was created," Murphy told Vanity Fair of the character, a ruthless nurse who runs a psychiatric hospital in the original film. Murphy's version takes place around 15 years beforehand, just when she lands a job at the fated institution.

Netflix has made finding the original movie pretty easy: it's currently available to stream on the platform. If you would rather rent or buy the film, you can do so on Amazon Prime, Google Play, or YouTube.

Be forewarned, though: Paulson's iteration of the character is much different than the callous tyrant she's based on. "[Watching One Flew Over the Cuckoo's Nest] gave me an opportunity to have a real spine of the character built-in, at least in terms of knowing where I was going with it," Paulson said during the Television Critics Association's summer press tour in August, per IndieWire. "It’s both a blessing and a curse, because I do recognize that some people will be looking for [original Ratched actor] Louise Fletcher, but they’re not going to find her, and I don’t want them to be disappointed.”

To Paulson, Nurse Ratched isn't the villain she's been made out to be, but rather someone haunted by her own personal trauma. “I think ultimately at the end of the day, [loneliness] is sort of what drives Mildred. A pursuit of survival and of finding some sense of home," she told Vanity Fair in the aforementioned interview. "Even though the methods that she chooses to achieve that internal security are somewhat questionable, I would argue that she’s doing them with a potentially selfish need, but a survival need nevertheless.”

More like this
Here’s Everything Coming To & Leaving Netflix In December
By Jake Viswanath
Dodi Fayed Produced Movies Starring Robin Williams & Demi Moore After 'Chariots Of Fire'
By Brad Witter
How To Stream Knives Out 2: When Will Glass Onion Be On Netflix?
By Radhika Menon
Lindsay Lohan Explained That 'Mean Girls' Homage In 'Falling For Christmas'
By Brad Witter
Get Even More From Bustle — Sign Up For The Newsletter