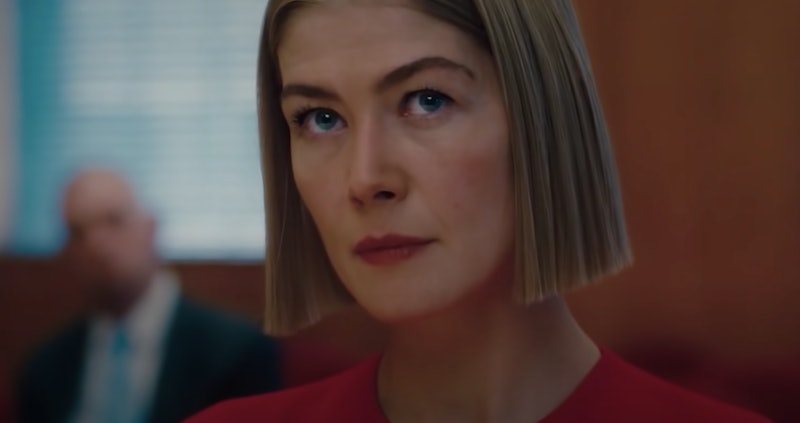 After the colossal success of Gone Girl, Rosamund Pike is back playing a "Blonde-Hitchcock" villain in the brand new dark comedy thriller I Care A Lot. In the Netlix-Amazon film, Pike stars as Marla Grayson, a crooked con-artist who preys on the elderly by acting as their legal guardian, forcing them into a home and draining them of all their money and assets. Yikes. Also starring Game Of Thrones Peter Dinklage, the film has already seen rave reviews and bagged Pike a Golden Globe nomination, but how to watch I Care A Lot In The UK?

While I Care A Lot is now streaming on Netflix (US), UK viewers can only access the movie via Amazon Prime. And, from the looks of the rave reviews, it'd be worth a new membership.

As the synopsis goes, Marla Grayson is a famous steely businesswoman with a Stepford Wife smile who somehow convinces the court to make her a legal guardian of vulnerable elderly people, before carting them to a nursing home, conning them out of all their assets when they die — or as she repeatedly puts it, "caring is my job".

However, her ruthless plans go awry when she targets Jennifer Peterson (played Dianne Wiest), a woman with minor mental health problems who lives alone. Turns out, her son is a powerful and violent Russian gangster Roman Lunyov, played by Peter Dinklage. Let's just say this puts a spanner in the works of Grayson's plans. Not that the self-proclaimed "lioness" backs down...

Dinklage as Lunyov is a scene-stealer in I Care A Lot and the two have some dark but funny exchanges. The cast also includes Birds of Prey's Chris Messina as a slimy lawyer and Eiza González as Fran, Marla's lover, and partner-in-crime.

It's you're still blown away by Rosamund Pike's amazing portrayal of Psychopath Amy Dunne in Gone Girl then I Care A Lot is a much watch.