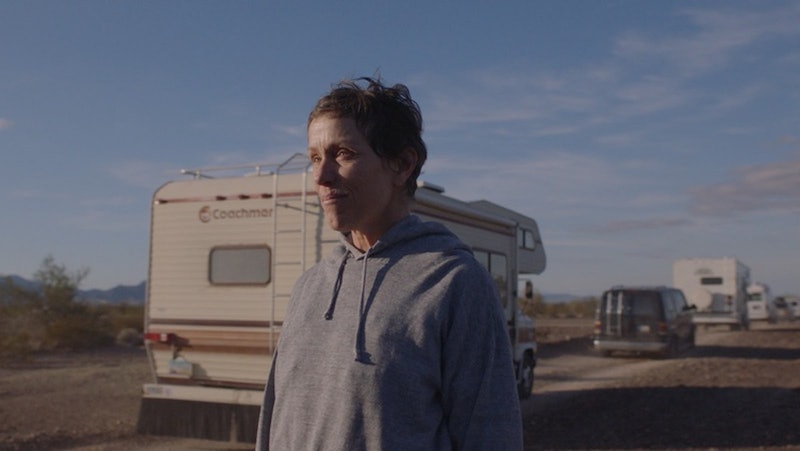 Based on the book by journalist Jessica Bruder, Nomadland follows the story of a widow who leaves rural Nevada behind and sets out to explore the American West. The Chloé Zhao-directed film recently won big at the 2021 Golden Globes, leaving many on this side of the pond wondering how to watch Nomadland in the UK. Thankfully, the critically-acclaimed drama will be available to watch in the UK soon, and here's where you'll be able to find it.

Nomadland will be released on Star on Disney+ on Friday, April 30 in the UK, and the film will be available to stream at no additional cost for Disney+ subscribers. The Golden Globe-winning drama is also set to be released in cinemas in the UK once lockdown restrictions are eased. In England, cinemas will not open until at least Wednesday, May 17. However, in other parts of the UK cinemas may open sooner.

Starring Academy Award-winner Frances McDormand (Fargo, Three Billboards Outside Ebbing, Missouri), Nomadland revolves around the newly-widowed Fern, who is forced to leave her Nevada home following the economic crash of 2008. After packing her backs and hitting the road, Fern begins to navigate through her new life journey, befriending fellow modern-day nomads along the way, iNews reports.

As mentioned, the film recently enjoyed history-making success at the 2021 Golden Globe Awards, picking up the trophy for Best Director and becoming the first-ever female-directed winner of the Best Picture category in the show's 78-year history. Speaking at the ceremony, director Zhao said in her acceptance speech: "Nomadland at its core for me is a pilgrimage through grief and healing." She continued: "So for everyone who has gone through this difficult journey at some point in their lives, this is for you."

As iNews reports, Nomadland also recently picked up the Venice Film Festival's most prestigious award, the Golden Lion, won the People’s Choice Award at the Toronto International Film Festival and is projected to win big at the forthcoming 93rd annual Academy Awards.

Nomadland is available to stream on Star on Disney+ on Friday, April 30 in the UK.

More like this
Yes, You Can Stream ‘To Leslie’ In The UK Now
By Sam Ramsden
Your Guide To Watching 'Everything Everywhere All At Once' In The UK
By El Hunt and Sophie McEvoy
Jemima Khan Used Her Own Life As Inspo For 'What’s Love Got To Do With It?'
By Darshita Goyal
Gerard Butler Insisted On Adding This Pivotal Scene To 'Plane'
By Catharina Cheung
Get The Very Best Of Bustle/UK
Sign up for Bustle UK's twice-weekly newsletter, featuring the latest must-watch TV, moving personal stories, and expert advice on the hottest viral buys.