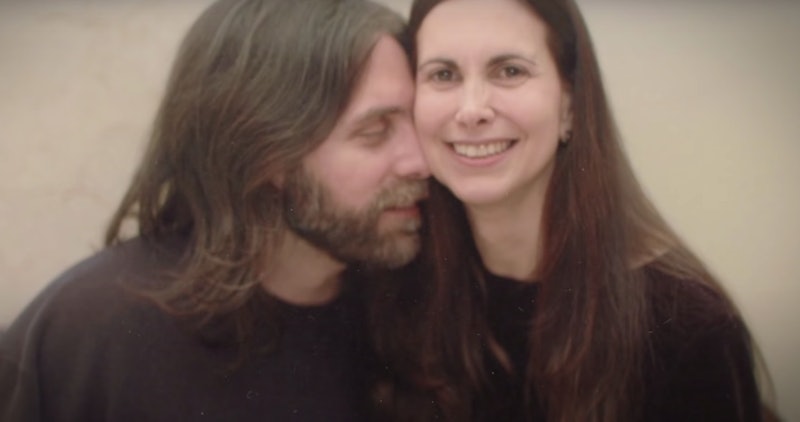 In October 2017, the New York Times sent shockwaves across the world when it exposed NXIVM, a so-called "self-help" organisation, for being a cult-like group involved in myriad illegal activities including racketeering, forced labour, and sex trafficking. Now the downfall of NXIVM and its leader Keith Raniere are being analysing in a new HBO show, but how can you watch NXIVM docuseries The Vow in the UK?

The Vow first aired in the States on August 23 and, according to the Radio Times, it's expected to be on UK TV sometime in November on the Sky Documentaries channel. I've reached out to a rep for Sky to clarify this, but have yet to receive a reply.

Featuring interviews from "many once high-ranking, inner-circle members" of NXIVM, per Esquire, the docuseries charts the inner workings of the cult and the "emotional toll of unfolding events" on those involved, as HBO writes.

Founded in 1998 by Keith Raniere and Nancy Salzman, NXIVM described itself as a self-help organisation and "multi-level marketing company," per entertainment news site Decider. The group worked through a pyramid scheme-like structure, selling "Executive Success Programs" and other self-improvement courses to customers with the promise "that these classes would teach them how to experience more joy in their lives." As NXIVM grew, it became a worldwide community with several centres founded around the world.

Customers that bought into these programmes then had the opportunity to join and work for NXIVM. Those who progressed far enough into the "company" were given different coloured sashes depending on the role they held.

One prominent member of the group was former Smallville actor Allison Mack, who reportedly came up with the idea for a secret women's society within the organisation known as Dominus Obsequious Sororium (DOS). Roughly translated from Latin as "lord over the obedient female companions," DOS was believed to be a sex cult where "masters" would own a group of slaves "who would perform menial tasks for them" which included having sex with NXIVM's leader, Vulture writes. Raniere always maintained that all sexual encounters were consensual.

In April 2019, Raniere was convicted of charges that included sex trafficking and forced labour conspiracy. In the months preceding his conviction, several high-ranking members decided to accept plea deals after being arrested on charges ranging from extortion to sex trafficking to possession of child pornography. This included the Mack, Salzman, Salzman's daughter Lauren, NXIVM executive board member Clare Bronfman, and NXIVM's bookkeeper Kathy Russell.

More like this
A New Netflix Doc Will Explore The Unsolved Murder Of Jill Dando
By Sam Ramsden
Vanessa Bauer Is Reportedly Dating Her 'Dancing On Ice' Partner
By Darshita Goyal
Spencer Matthews’ Impressive Net Worth Expands Far Beyond Chelsea
By Sam Ramsden
Barney Walsh Has Been Linked With This Famous Miss World Winner
By Sophie McEvoy
Get The Very Best Of Bustle/UK
Sign up for Bustle UK's twice-weekly newsletter, featuring the latest must-watch TV, moving personal stories, and expert advice on the hottest viral buys.