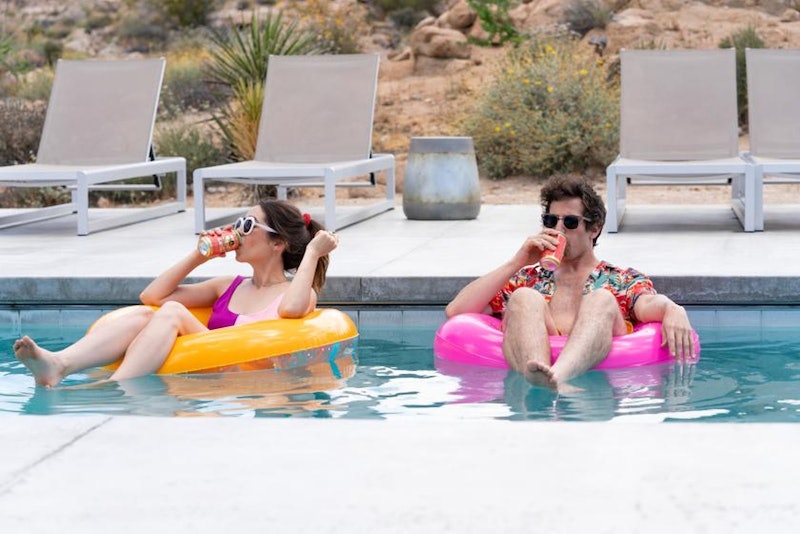 Starring Andy Samberg and Cristin Milioti, the highly-anticipated U.S. romcom Palm Springs centres on the story of two complete strangers who become stuck in a time-loop after a chance encounter. Following the film's initial release earlier this year, the comedy became a highlight of the 2020 Sundance Film Festival and has since enjoyed widespread critical acclaim. So, if you can't wait to see what all the fuss is about, here's how to watch Palm Springs in the UK.

As the Radio Times reports, Amazon Prime Video has announced the Max Barbakow-directed flick will arrive on the platform in early 2021 in the UK. An exact release date is yet to be confirmed, and I'll update with any new information once it becomes available.

The romantic comedy follows the story of carefree Nyles and maid of honour Sarah, who cross paths whilst attending a Palm Springs wedding. However, after discovering they've become trapped in a time-loop where they're forced to relive the same day over and over again, the pair must join forces and find a way out. Think Groundhog Day with much nicer weather.

Brooklyn Nine-Nine funnyman Andy Samberg and How I Met Your Mother's Cristin Milioti lead the film's cast, and are joined by the likes of Whiplash star JK Simmons, Grace and Frankie's Peter Gallagher, among others.

Commenting on the comedy's international Amazon Prime release, Samberg said he was "thrilled that Palm Springs is finally going to reach audiences outside of the U.S.," Digital Spy reports. Elsewhere, the Saturday Night Live alumni previously revealed he was nervous about the film's "legit acting."

"I'm very comfortable with comedy obviously, but I've got a lot less experience with more dramatic stuff. I would say that was the main difference for me coming into it," the actor told ComingSoon.net. "That was a big part of why I was so relieved when we got Cristin [Milioti] to do the movie. Because I knew she would be my crutch," Samberg added.

Palm Springs is coming to Amazon Prime UK in early 2021.

More like this
Yes, You Can Stream ‘To Leslie’ In The UK Now
By Sam Ramsden
Your Guide To Watching 'Everything Everywhere All At Once' In The UK
By El Hunt and Sophie McEvoy
Jemima Khan Used Her Own Life As Inspo For 'What’s Love Got To Do With It?'
By Darshita Goyal
Gerard Butler Insisted On Adding This Pivotal Scene To 'Plane'
By Catharina Cheung
Get The Very Best Of Bustle/UK
Sign up for Bustle UK's twice-weekly newsletter, featuring the latest must-watch TV, moving personal stories, and expert advice on the hottest viral buys.