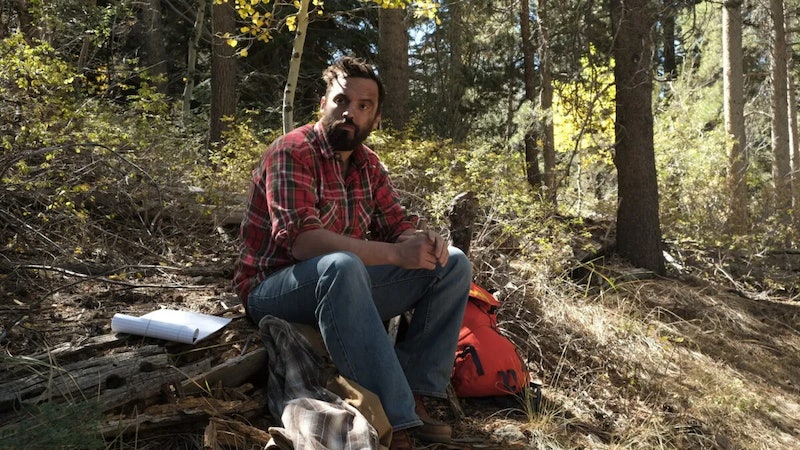 Courtesy of 'Ride The Eagle'

Co-written by and starring New Girl’s Jake Johnson, the forthcoming U.S. comedy Ride The Eagle follows the story of a man who is faced with a new set of challenges following the death of his estranged mother. If you’re wondering how to watch the Trent O'Donnel-directed comedy, you’ve come to the right place.

As Digital Spy reported, Ride The Eagle will be available for digital download on Monday, Oct. 4. Lightbulb Film Distribution recently acquired the rights to the film here in the UK, and Lightbulb’s Sales & Acquisitions Director, Peter Thompson, said the company are “thrilled” to be bringing the film to UK audiences this autumn.

“Jake Johnson plays a loveable stoner and his dog, Nora, steals every scene that she's in. It’s a film that will make you laugh – and that’s something we need more than ever”, Thompson commented.

Per Deadline, Ride The Eagle follows the story of Leif (Johnson) who inherits a picturesque log cabin following the passing of his mother, Honey. However, there is one condition: he must carry out his late mother’s elaborate to-do list, which Leif sets out to complete with the help of his ex-girlfriend, an eccentric local, and his beloved pup, Nora.

As mentioned, Ride The Eagle is co-written by the film’s director O’Donnell and Johnson, the latter of whom is joined in the cast by Academy Award-winners Susan Sarandon and J.K. Simmons, and The Good Place star D’Arcy Carden, among others.

“In the midst of the pandemic, while missing everyone, Trent O’Donnell and I wanted to make a movie about people coming together,” Johnson said previously of the film. “We also want to introduce the greatest actor of our generation: my dog Nora,” the actor added, Variety reports.

Ride The Eagle will be available for digital download on Monday, Oct. 4 in the UK.