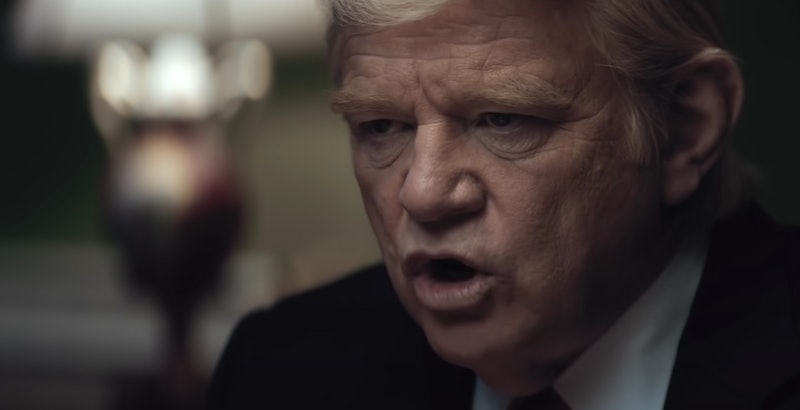 Based on the book A Higher Loyalty by former FBI Director James Comey, Showtime's new series The Comey Rule charts the lead up to Donald Trump's election as the President of the United States. Starring Brendan Gleeson as the commander-in-chief, starring opposite Jeff Daniels as Comey. So here's how to watch The Comey Rule in the UK, because you don't want to miss out on this take on Trump.

Described by Showtime as "an immersive, behind-the-headlines account of the historically turbulent events surrounding the 2016 presidential election and its aftermath," the series will cover the relationship between Trump and Comey and the controversies that led to the latter's termination in 2017.

The miniseries will debut in the States on Sep. 27, and a rep for Showtime tells me that, while there’s no specific air date as of yet, it’ll be broadcast in the UK in 2020 on Sky Atlantic and Now TV.

Not a lot has been revealed of The Comey Rule as of yet, but the official trailer released on Aug. 24 showcased that this is going to be a tense and somewhat eerie series. I mean, the physical transformation of Gleeson and Daniels is really something to behold.

The series will also provide one of the first renditions of Trump in a dramatic light rather than a comedic one. "This is not Alec Baldwin... whom I love, by the way," writer-director Billy Ray told Vanity Fair, referencing Baldwin's impression on Saturday Night Live.

"We're not here to ridicule anybody," Ray continued. "We talked a lot about where Donald Trump had a point of view that was defensible and valid, and we leaned in hard... I think that Donald Trump believed, and continues to believe, that personal loyalty is the coin of the realm in any kind of business transaction. And I think he believes that you can run a government that way."

More like this
Yes, 'The Price Of Glee' Is Available To Watch In The UK
By Catharina Cheung
Twitter Is Burning As Phoebe Dynevor Reveals Daphne’s 'Bridgerton' Exit
By Sophie McEvoy
Helena Bonham Carter Doesn't Think 'The Crown' “Should Carry On"
By Sam Ramsden
'Happy Valley' Recreated This Moment From S1 In Its Penultimate Episode
By Sophie McEvoy
Get The Very Best Of Bustle/UK
Sign up for Bustle UK's twice-weekly newsletter, featuring the latest must-watch TV, moving personal stories, and expert advice on the hottest viral buys.

This article was originally published on Aug. 4, 2020