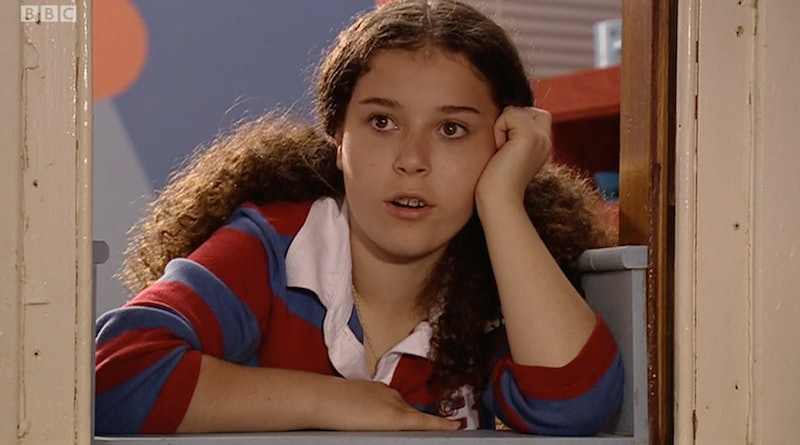 It's been nearly four years since the UK caught up with Tracy Beaker, but now Dani Harmer has confirmed that she'll be returning to the role in a brand new series. Based on the 2018 book My Mum Tracy Beaker, fans will finally get to see the Queen of Cool navigate raising a 12-year-old of her own on the small screen. So here's everything you need to know about the Tracy Beaker reboot.

From Feb. 11, you’ll be able to watch My Mum Tracy Beaker on BBC iPlayer and CBBC. Based on Jacqueline Wilson’s book of the same name, the series will be told from the perspective of Tracy’s daughter Jess (played by Emma Maggie Davies), who is whisked away by Tracy’s new football star boyfriend Sean (Jordan Duvigneau) “to a life of palatial mansions and fancy cars,” the BBC writes.

When the news was first announced, Harmer told The Sun "I can't wait to return again to the role of Tracy. I'm a fan myself and want to know what happens next and where this journey takes her. Being a mother, I know how much it changes you. So I'm looking forward to seeing how it has changed Tracy but still keeping her the same feisty, strong female lead that people know and love."

The series started filming back in October 2020, and speaking to the Radio Times in an interview on Jan. 26, 2021, Harmer said how bittersweet it was to be reunited with her old Tracy Beaker cast mates in the middle of a world-wide pandemic.

"[W]e e couldn’t hug anyone, so it was really hard," she told the publication. "You kind of had to fight all your natural instincts, especially with Lisa [Coleman] who played Cam. I just wanted to give her the biggest squeeze I possibly could.

"But yeah, it was it was really, really lovely to work with them again and it literally felt like we hadn’t worked with each other for like a day, let alone like 10 years."

My Mum Tracy Beaker saw a darker side to author Jacqueline Wilson's previous work on the character, as Stylist notes, which sees Tracy live "a hand-to-mouth existence on a tough housing estate" with her daughter. "I don't want an 'absolutely everything is quite wonderful' ending — after all, at the start of the first book Tracy herself says life isn't a fairy story where everyone lives happily ever after," Wilson said. "I'm dealing with adults leading adult lives, and I want to be truthful to all that. But she is my lucky character... and I have a soft spot for her."

First published in 1991, Wilson's The Story of Tracy Beaker was adapted into a CBBC series which ran from 2002 to 2005. The series continued in two spin-offs, Tracy Beaker Returns and The Dumping Ground which saw Tracy working as a care worker in the same care home she grew up in. Harmer only appeared in two episodes of the latter, which focused on a new generation of kids.

In the meantime, you can watch Tracy Beaker's entire journey on BBC iPlayer from the first episode in 2002 up to the Dumping Ground which ended last December.