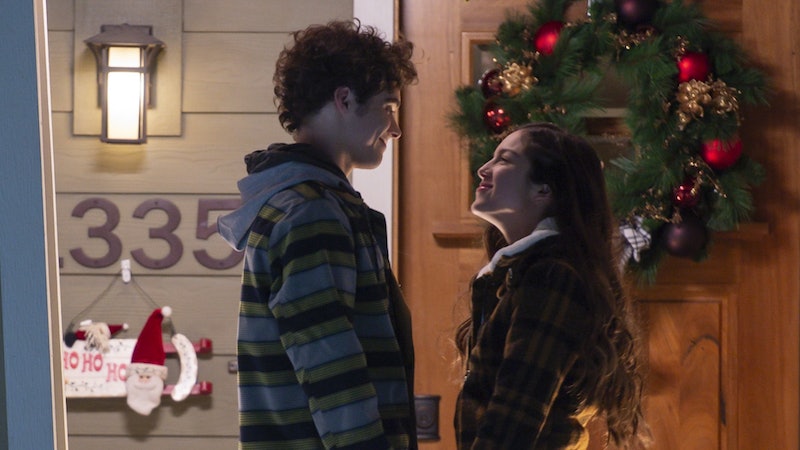 Because the coronavirus pandemic delayed filming for High School Musical: The Musical: The Series, Season 2 is airing much later than originally intended. It’s now been over a year since Season 1 ended, so you may have forgotten where we last left Nini, Ricky, and the like. Ahead of the new episodes, let this Season 1 recap catch you up.

Nini began the season in a new relationship with EJ, which made her ex Ricky super jealous. In an attempt to win Nini back, Ricky decided to try out for the school musical with her. The play for the semester was High School Musical, and Ricky landed Troy while Nini landed Gabriella. Meanwhile, EJ was cast as Ricky’s understudy. As EJ got more jealous of Nini and Ricky rehearsing together, EJ decided to steal Nini’s phone to check if she’d been talking to Ricky. When Nini found out, she broke up with EJ.

Gina Inserted Herself Into The Drama

Gina wanted the role of Gabriella, so she spent much of Season 1 plotting against Nini. After Nini and EJ broke up, Gina fake-dated EJ to try to upset Nini so she would drop out of the play. This ultimately didn’t work. Eventually, Gina started opening up to Ricky about some of her insecurities and struggles, and the two began to bond over similar family issues — which did make Nini jealous.

Ricky’s parents separated in Season 1, and he had to deal with both of them striking up romances with other people. When his mom showed up to the opening of the play with her new boyfriend, Ricky almost quit the whole thing. But he summoned the courage to go on stage for the big “Breaking Free” performance.

Towards the end of the season, Gina’s mom decided they had to move, but Gina was able to fly in to perform in the play. Ashlyn then offered to let Gina stay with her through at least Christmas — so Gina’s not going anywhere just yet.

Drama teacher Miss Jenn lied about how much of a role she had in High School Musical (her sole line in the play was cut). When the principal found out, he tried to fire her. But the drama kids loved Miss Jenn so much, they sang a song to the school board and won her job back. She also almost lost the play when the school caught fire, but she managed to relocate the stage to an unburned part of the building.

Miss Jenn was also part of Ricky’s parental drama when she started flirting with Ricky’s dad — not knowing he was her student’s father. Plus, she got cozy with fellow teacher Mr. Mazzara.

Carlos, the play’s choreographer, and Seb, who played Sharpay, grew close during rehearsals. They eventually decided to go to the school dance together. It was very cute.

And at the end of the season, Ashlyn planted a big kiss on Big Red (Ricky’s BFF). Expect these romances to carry into the next season.

After a talent scout watched East High’s play, she offered Nini a spot at a performing arts school in Denver — starting the next month. It’s Nini’s dream school, but the offer is complicated by the fact that she and Ricky only just got back together and said “I love you.” Now, she’ll have to decide whether to stay in Utah with Ricky or follow her dreams in Colorado.

More like this
This New Comedy Is The Perfect Combination Of 'Jane The Virgin' & 'New Girl'
By Darshita Goyal
Here’s When 'She-Hulk' Takes Place In The MCU
By Brad Witter
How Marvel’s 'She-Hulk' Changes Her Comic Book Origin Story
By Brad Witter
At 14, Tatiana Maslany Was Obsessing Over Tamagotchis & The Spice Girls
By Gabrielle Bondi
Get Even More From Bustle — Sign Up For The Newsletter