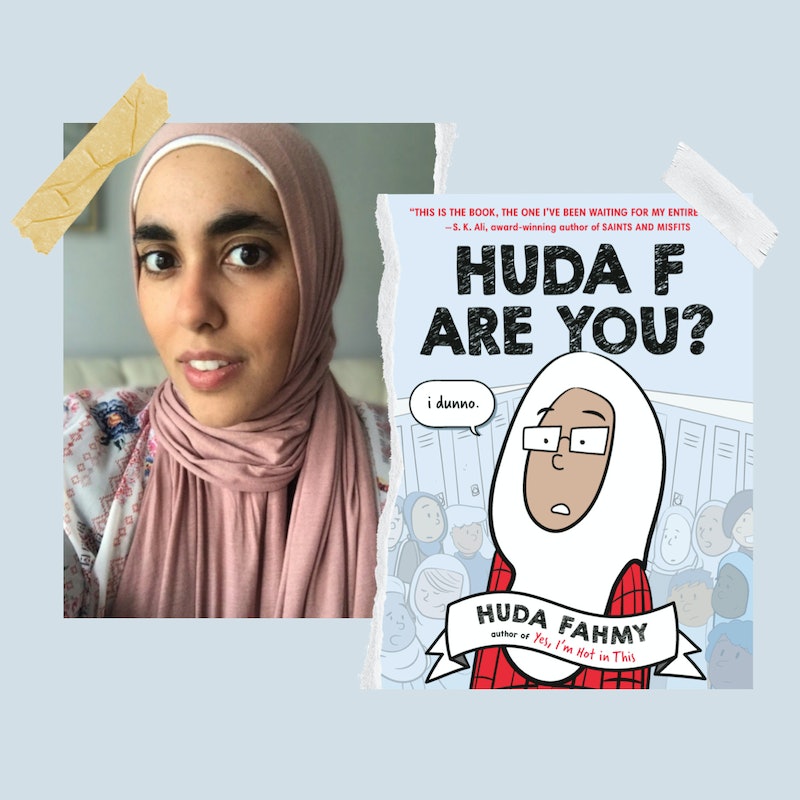 Huda Fahmy has never owned a light blue hijab. She owns a collection of navy blue abayas, a loose-fitting robe worn by Muslim women, but usually pairs them with pink, teal, or even leopard-print hijabs instead. But when she sketched a protagonist for her popular comic series, Fahmy wanted to lean into her obsession for navy blue abayas, and figured light blue was the best color to match. “That’s literally one color I don’t own,” the author says with a laugh. “People gift blue hijabs to me now because they think I want them.”

This artistic decision explains the character’s sartorial calling card. In the past four years, Fahmy has penned three books featuring her fictional alter ego, who’s also named Huda F. In the latest, Huda F Are You?, Fahmy moves the character to Dearborn, Michigan, a Muslim hotspot where hijabs are more common than in your average American city.

Huda F Are You? is the most narrative of Fahmy’s three books. (Her previous two, 2018’s Yes, I'm Hot in This: The Hilarious Truth about Life in a Hijab and 2020’s That Can Be Arranged: A Muslim Love Story, assemble a collection of comics with recurring characters.) In the new bildungsroman story, the character has to figure out, as the title suggests, Who is Huda?

Fahmy spent 13 formative years in Dearborn, but her comics are purely fictional, she says. Regardless, they’re inspired by her life. For example, while studying English at the University of Michigan, Fahmy worked in a textbook bookstore and almost always punched in wearing a hoodie. When one day, she showed up in a different ensemble, her boss was confused. He thought Muslims were only allowed to wear hoodies. “I was like, first of all, I need to be changing clothes more often,” jokes Fahmy, who graduated in 2006. “But also, if you’re Muslim, and you happen to only wear black, that [becomes] equated with, ‘All Muslims have to wear black.’”

It’s a similar experience to some of Huda F.’s, like when the character drinks too much jolt soda, gets a kidney infection, and the doctor asks if her religion prohibits drinking water. (She replies “yesss” with a toothy grin.) Or, when she confesses to her classmate that she likes him, and he says he thought Islam prohibited admitting that.

Before her career in comics, Fahmy spent eight years teaching middle and high school English literature. In 2016, she had her first son and took a break from teaching to focus on writing, which had always been her passion. Soon after, Donald Trump was elected president and she saw a call on Twitter for more Muslim writers. Fahmy, who’s lived in Texas since 2011, submitted a collection of essays to literary agents, but no one was interested. A year later, her sister suggested she turn her essays into comics. Fahmy had never drawn before but had always loved the Sunday comics (she learned English from Garfield). “She was like, ‘Can you just do stick figures? Can you take this story and turn it into a little stick-figure comic for me?’”

In Fahmy’s words, a lightbulb went off.

She started posting her comics on Instagram, gradually amassing a following of over 300,000 users, Muslim and non-Muslim followers alike. Her secret? Light-hearted humor and clapback wit. She talks of strange men on Muslim dating apps and people who give unsolicited golfing advice — and also relates back to current events, like when Ramadan was spent in isolation and Zoom iftars became a thing, or when France attempted to enforce a hijab ban.

The point is, she knows how to engage with audiences around the world and creates a sense of unity and confidence by cracking jokes. “It’s really important that Muslims get afforded that luxury of nuance,” says Fahmy, who’s second-generation American (her mother is Syrian and father is Egyptian). “This is a Muslim story, not the Muslim story,” she says of her latest work.

For Fahmy, telling stories through comics feels like therapy. She noticed how entertainment with Muslim characters is rarely made by Muslim creators, and if it is, it often pokes fun at the religion. “There are so many people in media, TV, and film who can’t help but do accents in a derogatory way. You’re just giving these other people ammo to go ahead and make fun of us,” says Fahmy, who gets the occasional hateful message on social media. “I want to tell these stories, at least in a way, where it’s like, ‘Hey, I love being Muslim. I love the culture; I love my religion.’ There are a lot of Muslims like me, but there are a lot of Muslims not like me, and we’re all on our own journey.”

She imagines her platform as a safe space for people working to define themselves, which can be a lifelong process of learning and unlearning yourself as you engage with the world. “You’re not going to figure it out at the end of freshman year. You’re not going to figure out who you are at the end of high school,” she says. “I’m 36. I haven’t always figured it out, and it’s OK.”

What she has figured out is the global appetite for a brazen, reactive Muslim character with perfect comedic timing. Oh, and Fahmy now sells hijabs in a turquoise blue shade, named Yes, I’m Hot in This.