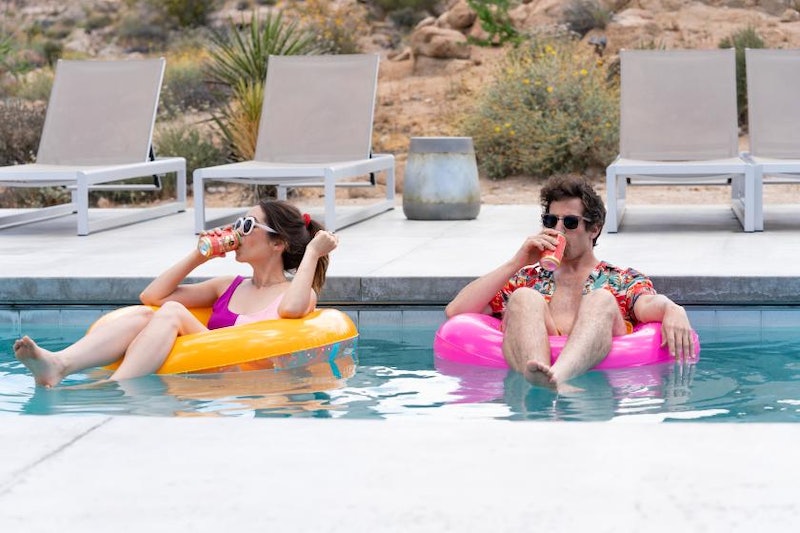 In Hulu's new sci-fi-twinged romantic comedy Palm Springs, wedding guests Sarah (Cristin Milioti) and Nyles (Andy Samberg) find themselves stuck in a time loop where they have to re-live the same day over and over again. Nyles has been stuck in the loop for a while, but the film starts with Sarah being newly introduced to the loop. Together, the two go through various stages of dealing with their situation: they party, they get depressed, they relax, they do crazy stuff. Eventually, Sarah wants out, and it's her drive and determination that eventually gets the duo out of their wacky predicament. But how exactly does Palm Springs end?

Spoilers ahead for the end of Palm Springs. As the movie opens, the characters find themselves attending a rather bland wedding being held in the desert of Palm Springs. The bride is Sarah's sister, and Nyles' girlfriend is one of the bridesmaids. Nyles is pretty chill about the whole day. He doesn't seem to mind that his girlfriend is kind of awful, or that the wedding is boring because (as we find out later) he's done it all a million times before. So when Sarah accidentally follows him into a cave and gets sucked into some kind of lava vortex, she gets stuck in the loop too, which is when their never-ending party begins.

The two have a blast, for sure. They drink, lounge by the pool, fly planes, do crazy stunts, and learn elaborate dance routines. There are a few times in the film when Sarah and Nyles actually kill themselves or die in one of their high-octane activities. But in true Groundhog Day fashion, every morning they wake back up in exactly the same spot where they fell asleep the night before the wedding.

While Nyles seems content to just live forever on the same day, Sarah's happiness on the inside of an infinite time loop is, well...finite. "I can't keep waking up in here," Sarah says desperately. "Everything that we are doing is meaningless." So instead of moping into a pit of despair, or wasting the time away like Nyles, she dives into reading and research. Each day she abandons the wedding and heads to the local library. She learns quantum physics and extreme scientific theories. She calls and video chats with scientists. She learns everything she can about time loops, timelines, and time travel.

Sarah figures out how to get them out of the time loop using science, and though none of it actually makes any sense to the viewer, we believe her because of the time and determination she put into learning everything she could. It sort of figures that the female character would be the one to use her brain and get these two out of their predicament. Matt Damon's character in The Martian may have coined the phrase, "I'm going to science the sh*t out of this," but time and time again, in movies like Hidden Figures, Black Panther, Contact, Arrival, and now Palm Springs, there's a woman actually figuring everything out.

More like this
Pamela Anderson’s Dating & Marriage History Could Be Its Own TV Series
By Jake Viswanath
Pamela Anderson's Sons Brandon & Dylan Have Their Own Hollywood Careers
By Arya Roshanian
Wait, Is Barney Stinson Related To Sophie On 'HIMYF'?
By Gretchen Smail
Everything To Know About 'Only Murders In The Building' Season 3
By Gretchen Smail and Kadin Burnett
Get Even More From Bustle — Sign Up For The Newsletter
From hair trends to relationship advice, our daily newsletter has everything you need to sound like a person who’s on TikTok, even if you aren’t.