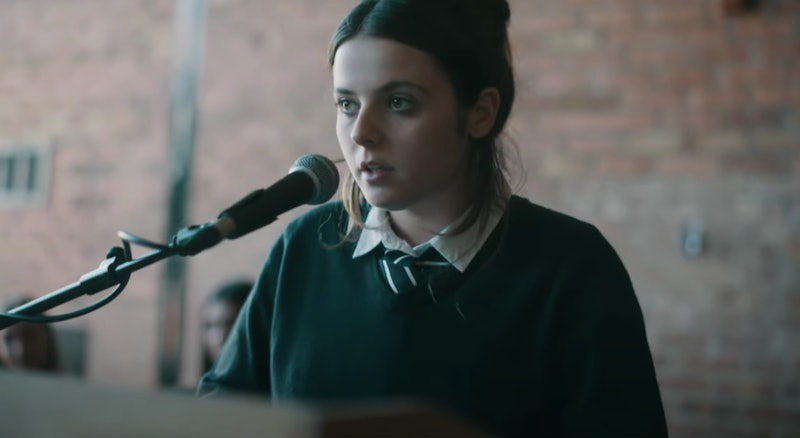 Welsh series In My Skin stars Gabrielle Creevy as Bethan Gwyndaf — a down-on-her-luck 16-year-old who hides her bleak home life from her friends. And after wrapping up its five-episode run on BBC Three this spring, the series has landed on Hulu here in the States. But since British programs often have shorter lifespans than American shows, it's unclear whether In My Skin will return for Season 2. However, the fact that it's coming to Hulu might spark enough international interest to warrant another installment.

The series contains just five episodes and was critically acclaimed in the UK (early reviews in the States are positive, too). In My Skin first started as a 2018 pilot, per Variety, before it was given a full-season order. It is also largely autobiographical. Series creator Kayleigh Llewellyn told the Guardian that, much like Bethan's mom, her own mother lived with bipolar disorder — a condition which she described as "quite severe." "I lived in fear that kids in my school would find out my mum was frequently being sectioned," Llewellyn recalled. "I thought they would make fun of me, ostracize me — or even worse, make fun of my mum."

In My Skin doesn't shy away from difficult topics — in addition to her mother's mental illness, Bethan also struggles as a queer girl attending a strict school. The tone and subject matter will likely remind viewers of gritty coming-of-age shows like The End of the F***ing World, Skins, and Norway's hit series SKAM. But unlike British teen programs like Sex Education and the aforementioned TEOTFW, both of which Llewellyn said are shot in Wales but don't look like it, the showrunner wanted to accurately portray the poverty of her home country — and specifically Cardiff, where the series takes place.

"No disrespect to those shows, but [producer Nerys Evans] and I talked a lot about wanting to recreate accurately the Wales we knew," Llewellyn told the Guardian. "You can be on a really grotty disgusting street that has old mattresses thrown out and litter everywhere, but the vista around you is the most beautiful green hills. The two live side by side." She continued, expressing her desire to depict "warm, broad characters" similar to those in comedies like Gavin & Stacey. "We wanted that, but also the grittier side — people struggling on the breadline and struggling to find good mental health care."

Hopefully In My Skin will prove successful enough in the States that a second season is all but inevitable.

More like this
Wait, Is Barney Stinson Related To Sophie On 'HIMYF'?
By Gretchen Smail
Pamela Anderson’s Dating & Marriage History Could Be Its Own TV Series
By Jake Viswanath
Everything To Know About 'Only Murders In The Building' Season 3
By Gretchen Smail and Kadin Burnett
Here’s Why Danny Masterson’s Hyde Isn’t In 'That '90s Show'
By Brad Witter
Get Even More From Bustle — Sign Up For The Newsletter
From hair trends to relationship advice, our daily newsletter has everything you need to sound like a person who’s on TikTok, even if you aren’t.