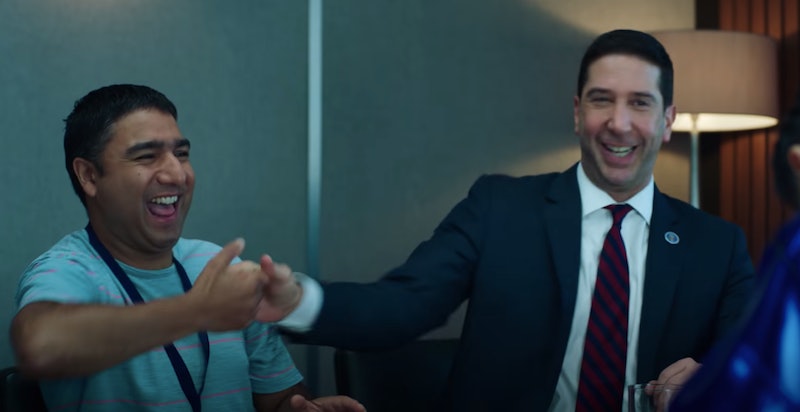 If you relish the idea of seeing David Schwimmer return to the small screen, you'll be pleased to know that his latest project Intelligence has already been renewed for Season 2. The news was announced ahead of the show's initial UK launch on Sky One in February 2020, which indicates that the network has high hopes for the workplace comedy and confidence that viewers will find themselves invested in the series when it hits NBC' streaming platform Peacock on July 15 in the US.

No other details about the second season have been released yet, including a potential premiere date. But considering that the coronavirus pandemic has stalled TV and film production around the world, it's likely that a second season wouldn't premiere until sometime in 2021, if not later. For his part, though, Schwimmer is thrilled at the opportunity to continue playing his character Jerry Bernstein, an NSA agent whose arrogance and pompous attitude is put on full display after he is assigned to work with a UK cyber-security team in London.

"I am thrilled to continue to pretend to be important to National Security,” Schwimmer said in a statement to Deadline in response to the renewal news. His co-star and series creator Nick Mohammed added, "I couldn’t be more delighted about setting off alarm bells inside GCHQ all over again."

Much like the first installment of the series, Season 2 of Intelligence will consist of six episodes, with Mohammed serving as both a star and writer alongside director Matt Lisey and executive producers Nerys Evans and Morwenna Gordon.

Though Schwimmer hasn’t worked on a sitcom since Friends ended 16 years ago, he jumped at the chance to star in a comedy and play a character that's very different from Ross Geller.

“It's funny, it's character driven, everyone can relate to the power dynamics,” Schwimmer told NBC News. “When you take the great combination of Nick's really sharp dialogue with all the physical comedy — and of course, the whole thing is against the backdrop of the highest stakes possible: national security, cyberterrorism and cybercrime — you've got a formula for a really fun, original show.”

More like this
Everything To Know About 'The Real Housewives Ultimate Girls Trip' Season 4
By Jake Viswanath
Andy Cohen Apologized To Larsa Pippen After A 'RHOM' Season 5 Reunion Dust-Up
By Brad Witter
'Knock At The Cabin' May Start Streaming Sooner Than You’d Think
By Jake Viswanath
The 'Freeridge' Cast Shared Their Hopes For A Potential Season 2
By Grace Wehniainen
Get Even More From Bustle — Sign Up For The Newsletter
From hair trends to relationship advice, our daily newsletter has everything you need to sound like a person who’s on TikTok, even if you aren’t.