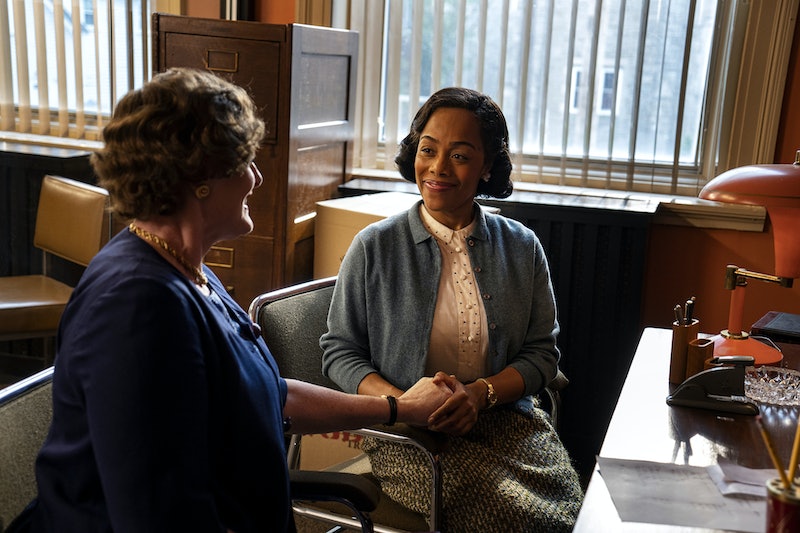 HBO Max’s new series Julia dramatizes the rise of beloved cook and television personality Julia Child in the 1960s. The show picks up at the very start of Child’s culinary career, when she’s invited on a television show to discuss her first book Mastering the Art of French Cooking. While there, a low-level WGBH staffer named Alice Naman (played by Brittany Bradford) tells Child (Sarah Lancashire) it was her idea to bring her on. It’s also Alice who serves as the impetus for Child’s famed cooking show The French Chef: after noticing how much fan mail Child received following her appearance, she encourages her to shoot a pilot.

The show itself is a blend of fact and fiction, and Alice is one of the few main characters not directly based on a real person. Instead, she’s “an amalgamation of individuals working at WGBH and in public television at that time,” according to Eater. Among those who served as inspiration for the character is Child’s The French Chef producer, Ruth Lockwood.

Lockwood was instrumental in helping Child become the first person to put a White House State Dinner on television. Prior to the 1968 TV special, White House Red Carpet with Julia Child, no camera crew had even been permitted to film a state dinner. But Child and her producers reportedly compiled binders of research about the historical, diplomatic, and culinary significance of the dinner, sending letters and making phone calls to convince the White House of the value of televising the event. Lockwood even pleaded their case in a letter to then-President Lyndon B. Johnson’s wife Lady Bird.

“Everyone is fascinated by the White House and our first family,” Lockwood wrote to Mrs. Johnson. “Millions of us have visited the public rooms, and more millions have toured parts of The White House on television. So far we have seen it only as a shrine with empty rooms. Now we would like to go behind the splendid façade and show how you and your staff make it run so well as an official residence with a home-­like atmosphere ... The American public-­at-­large has little conception of diplomatic life ... [and] the tremendous importance that the reception plays in our international affairs.”

Without Lockwood’s behind-the-scenes assistance, the major television event— and The French Chef, for that matter — might have not happened at all.

More like this
Everything To Know About 'And Just Like That...' Season 2
By Jack Irvin and Grace Wehniainen
Here’s What Happens To Bill & Frank In 'The Last Of Us' Video Game
By Brad Witter
The 'Gossip Girl' Reboot Creator Is “Looking For A New Home” To Air A Potential Season 3
By Brad Witter
The 8 Best Aidan Shaw Moments On 'Sex And The City'
By Grace Wehniainen
Get Even More From Bustle — Sign Up For The Newsletter
From hair trends to relationship advice, our daily newsletter has everything you need to sound like a person who’s on TikTok, even if you aren’t.