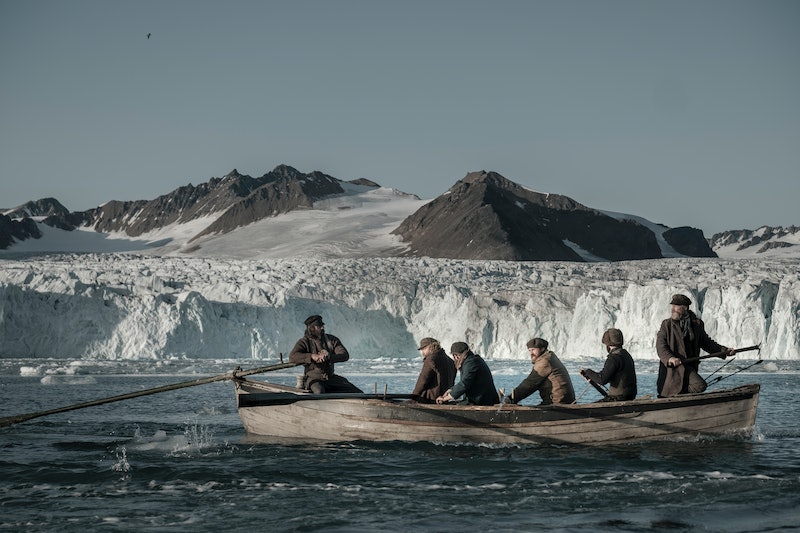 Colin Farrell, Jack O’Connell, and Stephen Graham star in BBC Two’s gory new drama The North Water — and, from the looks of the trailer, viewers should prepare for an unsettling journey to the Arctic wastelands. The five-part series starts in Hull during the late 1850s and follows a disgraced ex-army surgeon Patrick Sumner (O’Connell) who signs up as ship’s doctor on a whaling expedition to the Arctic. The new series is tipped to be cold as it sounds, as the doctor finds himself “on an ill-fated journey with a murderous psychopath”, per the official BBC press release. Directed by Andrew Haigh, the intense plot is described as both “brutal” and “beautiful” but is The North Water based on a true story?

While the new series isn’t based on a true story (which is a relief, considering the violent nature of the plot), it has been adapted from a novel inspired by real-life, 19th-century whaling expeditions. The novel – written by Ian McGuire – has been praised for its realism, with the Guardian writing at the time of its release,“The strength of The North Water lies in its well-researched detail and persuasive descriptions of the cold, violence, cruelty and the raw, bloody business of whale-killing.”

The New York Times bestseller, which was released in 2016, was also praised for its gripping, albeit gruesome, survival plot. The North Water is teeming with scenes of death, violence, and depravity laid in out in excruciatingly painstaking detail — from skinning polar bears to harpooning whales. “When McGuire’s sailors are not killing wild beasts they are killing each other – and worse,” reads a review from the Independent.

So what to expect from The North Water series? Alongside the brittle Arctic elements, Sumner will face the violence of his crewmates. As the BBC synopsis writes, fellow crew member Henry Drax (played by Farrell), is “a harpooner” and “brutish killer”.

“As the true purpose of the expedition becomes clear, confrontation between the two men erupts, taking them on a journey far from solid ground and beyond the safe moorings of civilisation,” it adds.

Ahead of the series release, writer and director Andrew Haigh said he was “incredibly lucky” to bring the work to screen. “The novel by Ian McGuire is a darkly brilliant piece of work, propelled by a vision of the world that is both beautiful and brutal,” he said.

“It feels bracingly modern and is piercingly perceptive about the nature of what drives us all. I feel incredibly lucky to be given the chance to bring this story to the screen and very privileged to be doing so with the BBC.”