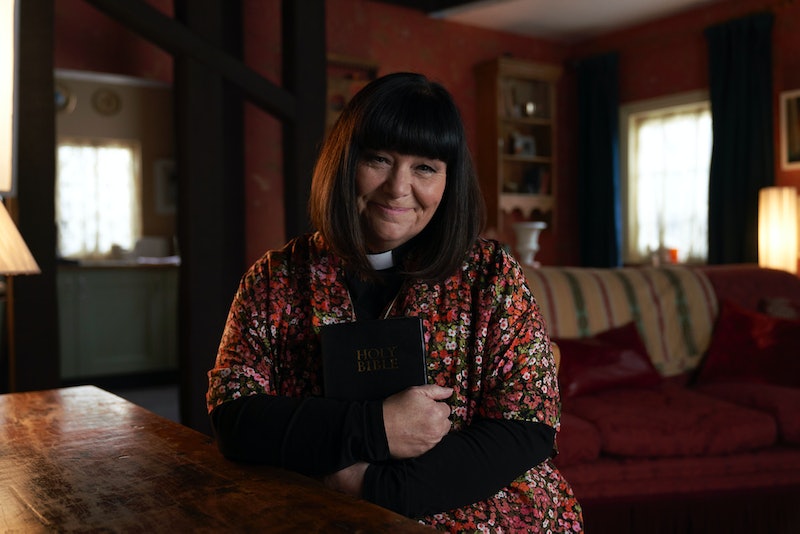 It hasn't been the greatest year, but that hasn't stopped some of Britain's most loved comedians from providing some much-needed laughs. One such talent is Dawn French, who will be a regular face during the Christmas line-up thanks to the new Vicar of Dibley shorts about lockdown, and her role as beloved author Beatrix Potter in a new Sky film. I'll certainly be spending my Christmas snuggled up on the sofa with those to watch, but who will French be spending hers with? Is Dawn French married?

French is currently married to Mark Bignell, who'd she been dating since 2011. Bignell is a therapist who co-founded the charity Hamoaze House, a drug and alcohol rehabilitation centre in Plymouth, with French's late mother Felicity. It was through Felicity that the two met, and they were married by 2013. French subsequently became a step mum to Bignell's two children, and the family currently reside in Fowey, Cornwall.

Before meeting Bignell, French was married to fellow comedian Lenny Henry for 26 years before separating in 2010. The couple first met in 1980 after Henry joined the Comic Strip, a group of British comedians that featured French, Jennifer Saunders, Rik Mayall, and Adrian Edmundson, among others.

The couple separated on amicable terms, with French attributing this to the pair being good friends above all else. "It was a tribute to the way we'd been married, the way we accomplished it," she told BBC News, with a spokesperson adding that "they fully intend to maintain their close friendship". While described as "extremely upsetting at the time" by French, she maintained that as they had been happily married for such a long time, "you don't stop looking after each other or caring for each other, whatever has happened." They also share a daughter, Billie, who they adopted when she was three weeks old after discovering they couldn't have children of their own.

Speaking about why their marriage broke down in an interview with the Express in 2016, Henry described it as a situation where "one partner wants the marriage to finish more than the other." "I think maybe one of us did, then the other did over a period of time and in the end, we thought, 'Oh, actually, maybe we both do.' We knew it wasn't possible to continue." Henry has also suggested that fame may have had a role to play, too. "It is a strange job, showbiz, because you are in the public eye. You're in a goldfish bowl. We just got through it like every family does," he said.