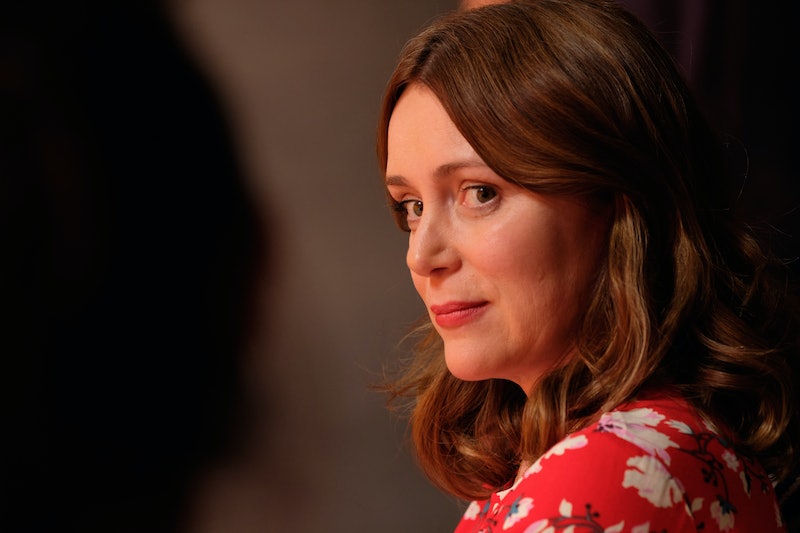 Starring Keeley Hawes, brand new ITV drama Finding Alice is set to debut on Sunday night (Jan. 17). The series, which follows the story of a woman dealing with the aftermath of her husband's sudden death, will present a very frank and human portrayal of grief, which may leave viewers wondering, is Finding Alice based on a true story?

The simple answer is no. Although Finding Alice will be full of many relatable moments that will make the characters appear real, the series is entirely fictional, written by Roger Goldby and Simon Nye. As the BBC reports, the idea for Finding Alice originated with Goldby, who has worked with both Nye and Hawes when he was a director on The Durrells.

"Death in its instance is very traumatic and horrendous but it's the legacy of the grief that comes after that we're all touched by at some point in our lives to varying degrees," Goldby told the BBC. "It can be destabilising, catastrophic, shocking and all-encompassing when the rest of the world is carrying on around you. It's negotiating your way through that journey that interested me rather than the death itself. And one of the most important things was to be authentic, real, and truthful and treat it with respect. It's not a documentary, but we wanted to be very honest."

In the six-part "darkly comic" series, Alice's world is turned upside down when her husband Harry tragically falls down a flight of stairs in their flashy, hi-tech new home.

As ITV explains, Harry's accidental death kicks up a storm of secrets, including debt, suspicion, and criminality that Alice is forced to confront in order to survive. Finding Alice also stars Joanna Lumley as her mother Sarah, who provides much of the show's dark humour and Isabella Pappas takes on the role of Alice's "emotionally-stifled" daughter, 16-year-old Charlotte.

"I think there is something so particular and compelling about watching a strong female-led drama, we are so lucky to have Keeley playing Alice, she has an incredible depth of performance combined with a pitch-perfect instinct for comedy," he told ITV. "Keeley will bring Alice to life beautifully to make Finding Alice heartfelt, moving and funny.”

Hawes, also an executive producer on the project, has spoken about the drama's lighter aspects when tackling a difficult subject.

"As well as the emotion there is so much light. There is a gallows humour," said Hawes to the BBC. "People naturally go towards the lighter aspects, it helps you and she does put her foot in it a lot and so does her mother – it's a trait she gets from Sarah."

More like this
Everything To Know About The 'Daisy Jones & The Six' TV Series
By Maxine Harrison and Brad Witter
ITV's 'Maternal' Was Inspired By A Very Simple – & Unanswerable – Question
By Maxine Harrison
The Song At The End Of 'The Last Of Us' Ep 1 Has A Deeper Meaning
By Sophie McEvoy
Twitter Is Burning As Phoebe Dynevor Reveals Daphne’s 'Bridgerton' Exit
By Sophie McEvoy
Get The Very Best Of Bustle/UK
Sign up for Bustle UK's twice-weekly newsletter, featuring the latest must-watch TV, moving personal stories, and expert advice on the hottest viral buys.