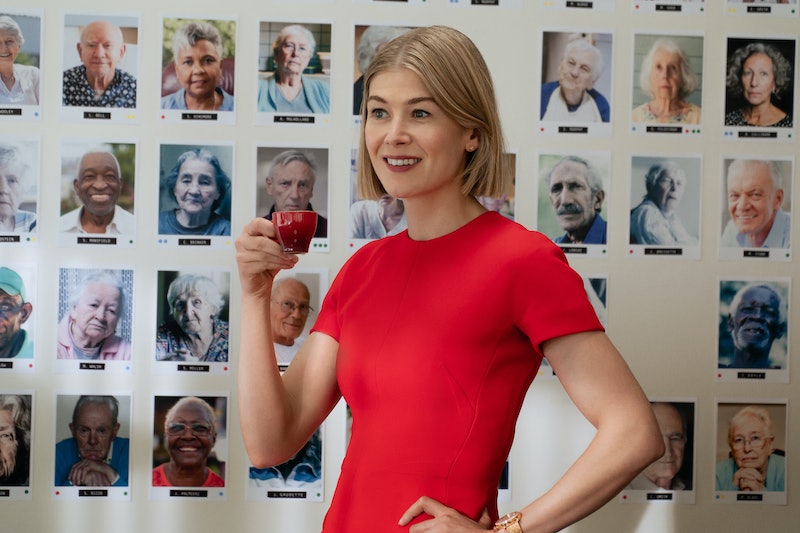 Netflix's new film I Care A Lot explores the idea of conservatorships in the extreme. Written and directed by J Blakeson (The 5th Wave), it stars Rosamund Pike as Marla Grayson, a court-appointed guardian for dozens of elderly people whose assets she "seizes and cunningly bilks through dubious but legal means." Unfathomable as it sounds, the premise has roots in real life: predatory guardianship incidents have been exposed as a growing problem in recent years.

Blakeson's interest in the subject started when he began reading horrifying "news stories about real-life predatory guardians who game the system and exploit their wards," he says in the film's press notes. "Imagine opening your door one day and there is a person standing there holding a piece of paper that gives them total legal power over you. That idea terrified me – and seemed very relevant right now."

These cases often go unnoticed by the general public, or are supported because it's believed that the decision is for the older person's own good. But the circumstances surrounding conservatorships are so ethically ambiguous that the whole system has been under scrutiny for decades; in 2018, the United States Senate Committee on Aging "called for a major overhaul in the guardianship system, warning that 'unscrupulous guardians' have used their position to get control of vulnerable people and then 'liquidate assets and savings for their own personal benefit,'" according to the New York Times.

The Intercept writes that, "Though guardianship can at times be beneficial for the elderly" if they are "at risk of being swindled" or genuinely need assistance, "a growing movement over the last few decades has raised staggering examples of how mentally sound seniors lose their rights" through the process and become "totally isolated and forced to live in ways wholly contrary to how they want."

One of the most illuminating examples is the case of guardian April Parks, who was convicted in 2019 on over 100 counts of perjury, dozens of charges for theft and elder exploitation, and one count of racketeering. It's not a stretch to think she may have inspired Marla Grayson's story.

"As a society, I think we tend to ignore and undervalue older people," Blakeson wrote in I Care A Lot's press notes. "We see 'the elderly' as a problem to fix, or to move out of sight, forgetting they are all unique individuals who are still very much experiencing their own lives ... I hope the film will bring to light the fact that we should all be more prepared for getting older. The elderly are prime targets for scams and exploitation. And we should all be vigilant and proactive in setting up protections – not just for the older people in our lives, but for ourselves too."

More like this
Lindsay Lohan & Jonathan Bennett Celebrated Mean Girls Day Very Differently
By Jake Viswanath
What’s New On Netflix: Ana De Armas’ 'Blonde' & A Nick Kroll Special
By Arya Roshanian
These 25 International Horror Movies On Netflix Prove Fear Is A Universal Language
By Bustle Editors
Here’s Everything Coming To & Leaving Netflix In October
By Jake Viswanath
Get Even More From Bustle — Sign Up For The Newsletter