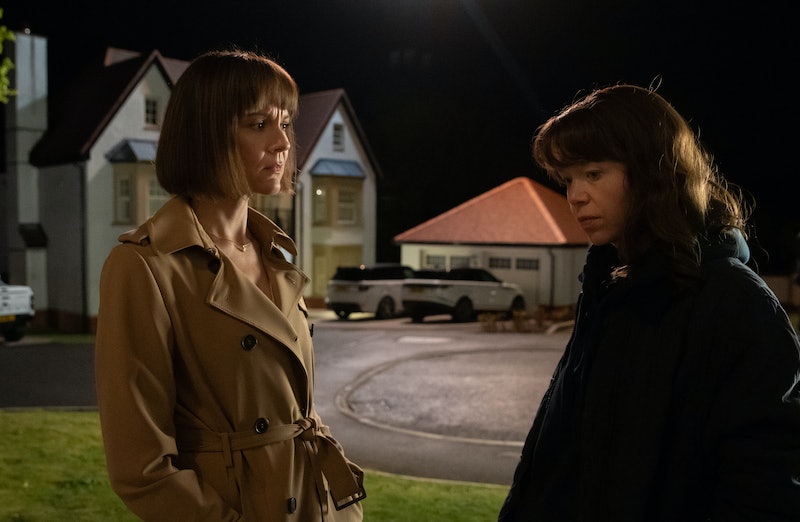 Starring Motherland’s Anna Maxwell Martin and The Bill’s Rachel Stirling, ITV’s upcoming drama Hollington Drive promises to be a captivating watch. Set in British suburbia, the four-part series follows two sisters as their lives become embroiled in the disappearance of a local 10-year-old boy. But is the drama based on a true story?

While Hollington Drive’s central narrative may feel pretty familiar – a local community rocked by the sudden disappearance of a young child – the series is actually fictional. It was created from the mind of Sophie Petzal, who also penned the Adrian Dunbar-led series Blood. The idea for Hollington Drive was born out of Petzal’s desire to write about family dynamics.

Speaking to ITV, the writer said, “I wanted to make a show that wasn’t a world away from I, but felt bigger and more ambitious tonally. Also, I had always wanted to write about sisters – I have a sister and that relationship is probably one of the most important in my life.”

While the sibling bond between the fictional Theresa (played by Martin) and Helen (Stirling) is totally different from Petzal’s own, she wanted to explore “the idea of a secret kept between sisters” and what impact that may have. In Hollington Drive, the sisters believe their kids may have something to do with the disappearance of the child and, as a result, make a series of decisions that makes them question who they are.

“These are people who have complex emotional lives, but their carelessness impacts on those who aren’t as privileged as them,” the writer explained, adding that “their decisions to protect themselves have terrible consequences, which for me is emblematic of reality.”

Petzal continued: “I wanted to paint a picture of two very specific characters, whose choice of actions is influenced by where they’ve come from and their own fears.”

Hollington Drive will premiere on ITV on September 29 at 9 p.m. The series will also be available to watch on the ITV Hub.

More like this
ITV's 'Maternal' Was Inspired By A Very Simple – & Unanswerable – Question
By Maxine Harrison
ITV’s New Take On 'Love Island' Is Only For MILFs & DILFs
By Sam Ramsden
Helena Bonham Carter Doesn't Think 'The Crown' “Should Carry On"
By Sam Ramsden
'Abbott Elementary' Fans Probably Missed This 'Parent Trap' Easter Egg
By Sam Ramsden
Get The Very Best Of Bustle/UK
Sign up for Bustle UK's twice-weekly newsletter, featuring the latest must-watch TV, moving personal stories, and expert advice on the hottest viral buys.