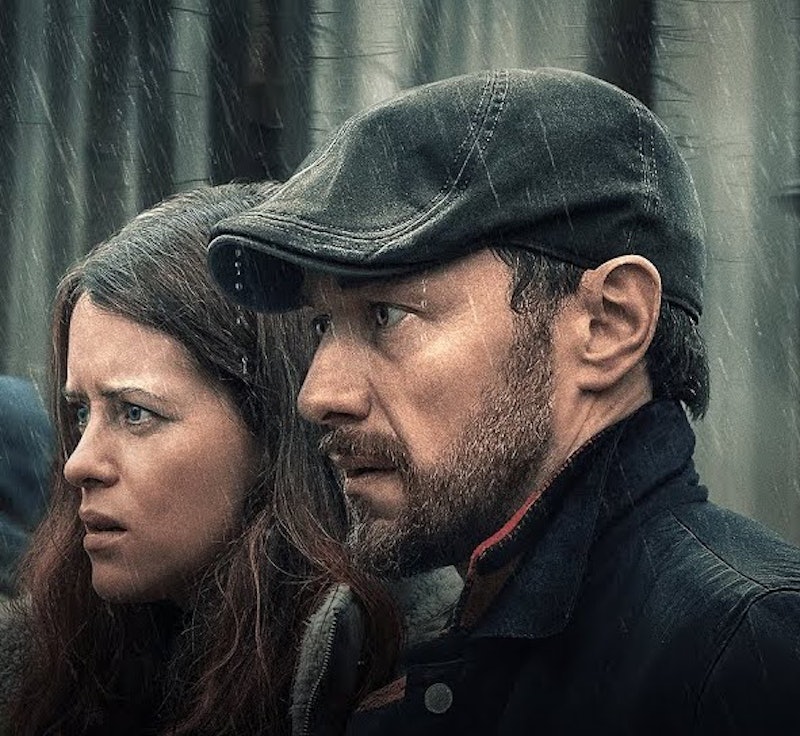 Written and directed by French filmmaker Christian Carion, My Son sees James McAvoy in his most challenging role yet. Adapted from Carion’s 2017 film of the same name, McAvoy plays a father on the search for his missing seven-year-old son. The catch? The actor is the only star of the film that isn’t working from a script.

Unlike his co-stars Claire Foy, Tom Cullen, and Gary Lewis, McAvoy was only provided with a six-page outline according to the Guardian. The unusual production choice was made to add “real tension”, notes the publication, and should let McAvoy better inhabit the the confusion and panic of searching for his character’s son.

While McAvoy reacting to events in real-time should give the film extra realism, just how real is the plot — is My Son based on a true story? Like its French counterpart, Carion’s story is entirely fictional. It’s a departure from his usual work, as the filmmaker has a “knack for finding fascinating true stories” according to Variety, with wartime tales a particular favourite.

As Paste Magazine notes, the lack of script allowed McAvoy’s ability to improvise affect the intensity of his emotions, leading to a much more engaging mystery to follow. “It’s almost like a scheduled documentary,” Carion said of his work. “It’s a mix of a lot of things, but to me it’s still cinema.”

Speaking of cinema, it’s a little unclear as to when British audiences will be able to see the film. While My Son will be available to watch exclusively on NBC’s new streaming service Peacock in the States, there’s currently no info on to watch the film in the UK. But, as Empire notes, there’s a possibility that it’ll appear on Sky and NOW in due course due to a recent deal between the British broadcaster and the American streaming service.

More like this
Twitter Is Burning As Phoebe Dynevor Reveals Daphne’s 'Bridgerton' Exit
By Sophie McEvoy
Turns Out George Clooney Is A Huge Fan Of This Classic British Game Show
By El Hunt
Alan Carr's 'Changing Ends' Is A Witty Sitcom Based On His Own Life
By Darshita Goyal
Everything To Know About The 'Daisy Jones & The Six' TV Series
By Maxine Harrison and Brad Witter
Get The Very Best Of Bustle/UK
Sign up for Bustle UK's twice-weekly newsletter, featuring the latest must-watch TV, moving personal stories, and expert advice on the hottest viral buys.