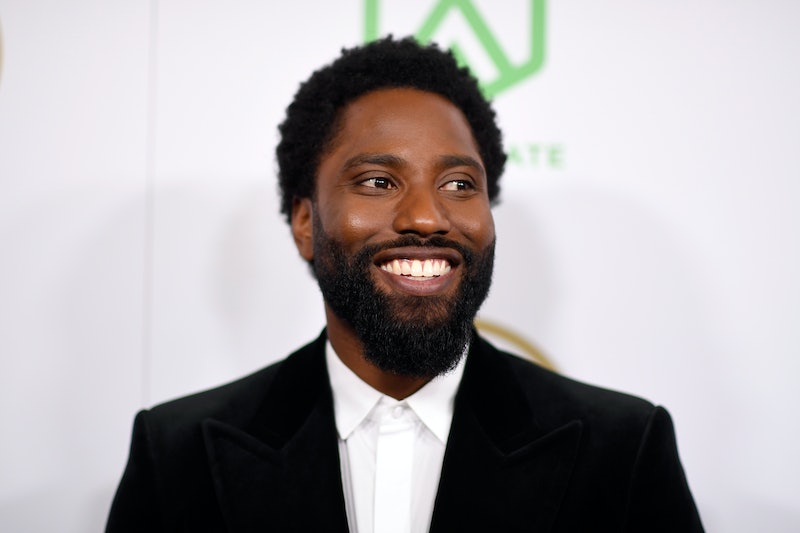 He plays a rising Hollywood star in a contentious relationship in Malcolm & Marie, and while John David Washington is just as in demand in real life, his love life looks a little different. Despite his onscreen chemistry with co-stars like Zendaya, John David Washington is single at the moment — although based on his Instagram comments, there are plenty of women out there who would be happy to change that. Though he keeps his personal life out of the spotlight, Washington has previously joked about being "single AF" in interviews with Ellen DeGeneres and The Breakfast Club.

Following his breakout role in the Oscar-nominated film BlacKKKlansman in 2018, DeGeneres asked Washington who he was planning to take with him to the ceremony that year. The actor opened up about the two most important women in his life: his mother Pauletta Pearson Washington and Beyoncé. "I'm bringing mom," he told the talk show host. She deduced that he must be single, and he shook his head with defeat. "It's hard out here," he said.

But that's fine by him, because he is his mom's biggest fan and would probably prefer to take her out over anyone else. He has publicly defended her in the past when the media attempted to overshadow her with his father Denzel Washington's acting success. "She was earning more money than he was when they married," he told Today. "Before they got married she was on Broadway working. She paid for their first date; she paid the bill; she paid the cab ride."

While he's clearly dedicated to his family, Washington did admit in 2016 that being the son of one of the biggest and most beloved actors in the world has made him cautious when it comes to relationships. "It does make it tricky, making friends, in relationships, significant others and all that," Washington told Charlamagne Tha God about the affect of his father's fame. "I've been in two relationships and they both faltered because of the trust thing, paranoia by nature... It might've been my own paranoia that sabotaged the relationships. They were okay in hindsight."

Washington has emphasized his unending sense of loyalty to his family — and anyone else he loves — in many interviews over the years. In a "Finish this Sentence" segment with The Hollywood Reporter, Washington commented on that quality of his. When prompted with, "If I could have a nickname like 'The Rock,'" he finished the statement with, "Mine would be 'The Faithful,' ladies?"

And while he doesn't like to speak about his love life publicly, Washington has been incredibly effusive about his female costars, recently admitting that he has been "learning from" Zendaya, despite being 12 years her senior. "She has far more experience than I do in the industry," Washington told Variety in January 2021. "I've only been in it for seven years. She's been in it longer, so I'm learning from her. I'm the rookie. ... Some of the stories she's shared about what she's had to go through with Twitter and everything. I appreciated her wisdom and discernment when it comes to this business. I admire that." And there's plenty to admire about Washington.

This article was originally published on Jan. 27, 2019