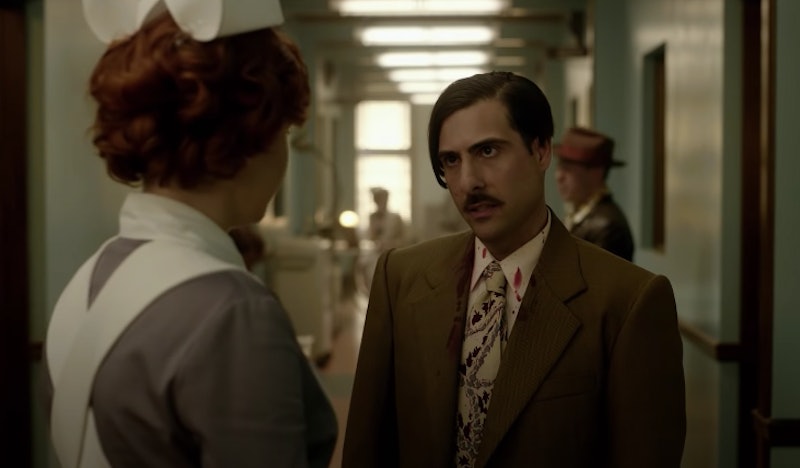 Fargo's fourth season tells the tale of two families: a Black family hoping to escape the severe racism of the South, and an Italian family looking for a better life in the U.S. Oh, and they both want to be the crime family in charge, which leads to a pretty bloody competition of the gangsters. And while, Chris Rock's character, Loy Cannon is reportedly inspired by an actual mobster, Jason Schwartzman's Fargo character Josto Fadda isn't based on a real person.

As confirmed by creator and producer Noah Hawley, Fargo isn't really based on a true story, despite what the show tries to make you believe with the sarcastic "true story" title card that opens each season. "It's all just made up," Hawley told E! News. "The whole cloth. I didn't go looking for true crime. It started from a character standpoint and everything grew organically out of that." Therefore, Josto Fadda is just another fictional character. However, the entire Fadda family is inspired in part by the many Italian immigrant families who came to the U.S. in the 1900s, and more importantly, those notorious families who became mobsters.

According to FX's official description, Josto is the eldest son of mafia boss Donatello Fadda, and heir to the family business. He's described as "self-indulgent" and "impulsive," which feels right given that he has no desire to actually work for his standing in the mob and feels he's entitled to his father's wealth and power.

Schwartzman echoed this description of his character, calling Josto a "hothead" in an interview with Parade. "When we find out that Josto’s brother’s going to visit from Italy, we’re described as, 'One is a lion in a zoo, and one is a lion in the jungle,'" he explained. "That’s a way of saying that my character, the heir apparent of this crime family, has never really had to fight for anything on his own. He’s always had people behind him."

Although he couldn't take inspiration from any real-life historical figures, Schwartzman did say that he channeled his immigrant friends whose parents couldn't speak English. In Fargo, Josto's father can only speak Italian, and he uses his English skills as power over him. "I grew up with many friends whose parents didn’t speak English as well," he told Decider in a September interview. "They would reprimand their child in a different language, but the child would yell back in English. The power that whatever language I choose to speak is going to be a bit of a power play. So it’s been fun to do that."

More like this
This 'One Tree Hill' Wardrobe Error Is Going Viral On TikTok
By Brad Witter
Pamela Anderson's Sons Brandon & Dylan Have Their Own Hollywood Careers
By Arya Roshanian
Ashton Kutcher Wants Danny Masterson “To Be Found Innocent” In Rape Retrial
By Jake Viswanath
Armani Jackson Is Following In His Famous Actor Sister’s Footsteps
By Catharina Cheung
Get Even More From Bustle — Sign Up For The Newsletter
From hair trends to relationship advice, our daily newsletter has everything you need to sound like a person who’s on TikTok, even if you aren’t.